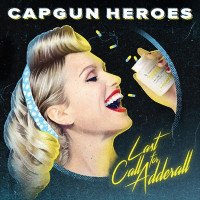 Early last year I had the pleasure of reviewing "Who the F*ck Are These Dorks?!" which was the debut EP by Chicago's Capgun Heroes. That 5 song EP immediately caught the attention of those embedded in the current underground pop punk bubble. For those who haven't heard, CGH take their own spin on classic pop punk and all things Ramonescore. Like most bands, Capgun were sidelined last year from performing. That time was used wisely to craft their debut LP "Last Call For Adderall" that showcases a growth in the band's songwriting. It's time to lace up your Chuck Taylor's and read on.


The band comes out swinging on "Back It Up" which kicks things off. This song is similar to the more aggressive side of the Riverdales in boasting 3 chords and a repetitive chorus. Capgun changes speed on "Won't Do You Wrong" which follows. This track is classic pop punk in every sense of the term. This mid-paced love song will have you singing along. In true Ramonescore fashion, the band yells out "1-2-3-4" before the verse. The album's single "That Girl" follows in the same tempo. This is a fun song chock full of pop punk references. Vocalist Joe CapGun sings about a girl with "27 patches on her arms" for example. Plenty of "whoas" in the backing vocals which will have you singing along. "Operation Chaos" shows the band taking a heavier direction. Fast downstrokes are present throughout this track. One is immediately reminded of the first time hearing Lillingtons "Death By Television" LP. This killer track warns of the CIA trying to know everything that you know. "Let You Go" opens with a solid bassline into a catchy guitar lead. This track has strong Fat Wreck Chords vibes in a quiet verse leading up to an explosive chorus. Next, the band tackles the 1958 hit "Do You Wanna Dance" first recorded by Bobby Freeman. Most punk rockers know this from the Ramones cover. The tempo is picked back up again on "Tonight" which features some of the most thunderous drumming on the album. Joe CapGun really showcases his vocal range on this track. This track also features immensely quick chord changes to add to the aggression. CHG return to classic 90s pop punk on the heavily Screeching Weasel influenced "Waiting." The intro alone will take you back to the days of flipping through MRR and the Lookout Records catalog. This track could have easily been a radio hit. Strong Sludgeworth vibes are present as well. The loose and fun "Wanna Go" follows. This is a classic Ramones-style track with 3 chords about being on the road with your band. The heaviest track on the album "Lobotomy" follows. This almost hardcore track features pounding drums to help keep the beat. "Stuck With You" has really solid riffage that leads to a bombastic chorus with all instrumentation kicking in gear. The debut album closes with a theme song of sorts simply entitled "HEROES." This catchy number has the band spelling out their name in the chorus which is always an effective approach. The band clearly dictates their mission of "Coming to your town and we're coming to get you."

Capgun Heroes have truly delivered a stellar debut album. It has been fun watching this band grow from the EP stage to crafting this fun full-length. The band does not hide their influences and proudly wears them on their sleeves. That being said, CGH definitely lyrically and musically has crafted their own formula of such a classic sound. I look forward to continue seeing the band's progress and impact on the scene.

Various Artists: ...And Out Come the Lawsuits