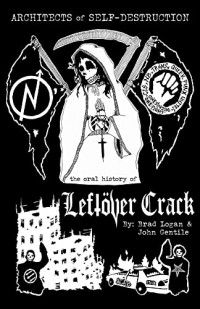 Architects of Self Destruction: The oral history of Leftover Crack 📕 (2021)

Disclaimer – Architects of Self-Destruction was co-authored by Punknews Editor John Gentile. Johnathon Gallienne, Johnathon1069, has no association with John Gentile outside of writing for Punknews. Gentile did not edit or preview this review.

I am, generally, not a fan of autobiographies, or biographies, written about bands. They tend to place too much emphasis on the band’s accomplishments while doing their best to gloss over internal conflict or the less than admirable behavior the members of the band have engaged in. There are exceptions, Cash: The Autobiography comes to mind. But, too often, these books tend to promise the truth and then present the truth as the subject of the book wishes it to be known. While I would not consider myself to be an expert on every moment of the Leftover Crack story, I did notice this while reading this book; there are plenty of instances where every member of the band is painted in a less than favorable manner. It’s not refreshing to find out the people in a band you like can be assholes, but it is refreshing to find out they’re willing to let others’ opinions of their behavior come to light.

With that in mind, the book makes no attempts to hide the fact the members of Leftover Crack were, perhaps too often, a band divided. There would be times where it was Ezra against Sturgeon, Alec against Sturgeon, Sturgeon against the band, and Sturgeon against Sturgeon. The only member, who seemed to drift through things without getting into too often, was Brad Logan. This might have to do with Brad’s easier going nature, but I think the fact he had more options when it came to putting some distance between him and the rest of the band. He had the ability to go work as crew on other band’s tours and not have to be in go mode for Leftover Crack when the band wasn’t recording or touring.

Throughout the book, the one thing that becomes clear is these were Sturgeon’s bands. While Ezra wrote “Gang Control” you got a sense that, at least in the moment, that was a point of contention. Not because it’s a bad song, it’s one of their most popular. But, because Sturgeon had a very specific vision for how he wanted the band to sound and the visuals associated with it. It never felt like Ezra’s contributions were contentious because they fell outside of this vision, but rather they were contentious for the same reason McCartney and Lennon butted heads or Mould and Hart butted heads. Whenever you get that much talent in one band there’s going to be tension, especially if you throw drugs into the mix. While Leftover Crack survived where the The Beatles and Husker Du did not, the relationship between Sturgeon and Ezra is another matter entirely.

Another topic the band doesn’t shy away from, though some are far more open about their use moving beyond what could be called recreational, is drugs. The death of Brandon being tied directly to drug use, a death you got the sense that all the members of the band at that time are still struggling to make sense of. This isn’t to say that any of them are deserving of blame, but having had friends OD and friends take their own lives … you get a sense of when someone hasn’t completely absolved themselves of what they didn’t do as opposed to what they did do. Brad Logan goes into fairly great detail about his drug abuse in a section of the book while the other members speak to their own drug use and abuse in relation to shorter anecdotes. A younger me might have read these stories and while not seeing them as an endorsement of drug use, might have found humor in some of them. An older me though sees them as cautionary tales, cautionary tales that can be funny at times. But, they are cautionary tales none the less.

The biggest thing I gathered from this story though, it is understandable why so many people walked away from this band. There are stories in the book that don’t depict Sturgeon in an at all flattering manner, stories he frequently presents his side of as well. For those wondering where the truth lies, that is largely left up to us as readers. For me, I think it’s somewhere in the middle. I did frequently feel like Sturgeon was never discounting what took place, instead he would have a different interpretation of what occurred. As I stated previously, kudos to the band for not trying to stop these stories from being told, it’s a welcome change of pace for bands telling their own stories.

I think my biggest critique of this book, is it can be hard to follow at times. When it says “Oral History” in the title that is absolutely what you’re getting. Each person involved in a story states what they have to say, followed by the next person. There is no attempt to convert these conversations or statements into a concise narrative like you would find in many biographies or auto-biographies. I will openly admit, my critique is 100% a personal taste issue though, and not something inherently flawed about the book. It tells the story of the evolution of Leftover Crack, the destruction that occurred along the way, and doesn’t leave out any of the beauty or ugliness that occurred along the way. Plus, there should be an audiobook version coming out, which solves all of my problems.

Naked Raygun: Over the Overlords