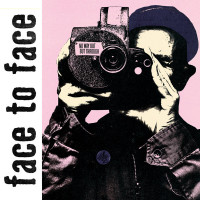 Not much needs to be written about a new album from a band that is as long in the tooth as Face To Face are getting these days. After rejoining the Fat Wreck Chords line-up a few years back, the band is continuing to deliver what works: fast power chords, bouncing bass lines, booming drums, and a sprinkle of melody here and there.

Their latest effort, No Way Out But Through, sticks to this meat and potatoes formula that will do nothing to win over new fans but happily please the longstanding ones. Energetic and urgent, Trever Keith and the gang tear through 12 songs of straight-up punk rock in the same vein as 2016’s full-length album, Protection. Tracks like the speedy “No Way Out But Through” and the angry “Ruination Here We Come” could arguably be among their best to date, which is really saying something considering the strength of this band’s back catalog. The album also offers a few upbeat melodies with the less pissed-off “Blanked Out” and “Vertigo-go” that help create a balance throughout the album.

If I must get picky as a longtime, diehard fan, I will say that this album does run a bit long. Clearing over 40 minutes total with only a single song hitting below the three-minute mark (by five seconds), I think at least half the tracks could have been trimmed down to fall somewhere around the two-and-a-half-minute range. It would still deliver the same punch, perhaps even more so. Also, the artwork and design are noticeably minimal for a Fat Wreck Chords product; a few generic graphics of old-timey cameras on a slim, two-fold cardboard sleeve with lyrics printed in a tiny font on a single white sheet. Even liner notes about the recording and production are absent.

As a whole, No Way Out But through is a complete reflection of Face To Face at their modern-day best. When compared to other punk bands that might be known for sporting 10-inch liberty spikes or telling dirty jokes on MTV, their trademark plainness and workman-like approach still manages to shine through on a solid offering of songs fit for any punk who digs their meat and potatoes.

Boris the Sprinkler: Live in Chicago