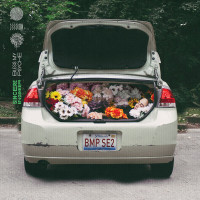 The cover art for Bless My Psyche, the sophomore album from Sincere Engineer (government name: Deanna Belos) and follow-up to the much beloved (and, if you care to dig through the archives here, much debated) Rhombithian, shows a beat-up sedan with an open trunk full of flowers. It's got the requisite Illinois license plate (shout out the Windy City) and a vanity plate that reads "BMP SE2." The key to the album is there. Sincere Engineer 2: Temple of Doom. The same adventure you loved before, back on the big screen.

It's worth talking a little about what's changed. LP 2 comes courtesy of Hopeless Records, and with it comes a little more pop shine and a little less Midwest grime, though you wouldn't know it on "Trust Me," the album-opener and most shoutingly bleak track on the record. However, those production flourishes start to show themselves on tunes like "Recluse in the Making", a could-have-been acoustic-lead tune that sounds perfectly fine here with its bright strings forward in the mix and a playful, mournful keyboard run tricking through the middle of it, or on "Dry Socket", the rock tune with the tastefully bright guitar lead, with just a hint of reverb to give it that post-screamo pop shine. Work with the California label, get the California sun.

Say this for the more expensive-sounding record; these embellishments serve, in a certain light, to elevate what Sincere Engineer has excelled at for two records straight, which is blue-collar, plainspoken declarations of lovelorn, love loss, depression and hopelessness. Belos is never the hero, never the winner, never the lucky one on her own songs, and she shouts these anxieties as If getting them out of her heard is the means to set herself free. I have no insider knowledge, but Belos has always left the impression that she banged these songs out on an acoustic on her own first, using them as a canvas to unburden her most self-doubting and self-destructive tendencies in the most straightforward language possible.

"Trust Me" is plaintive in its declarations; it's not so much that the song's hook is "I need help," it's in how those lines are delivered. It's not so much about wanting to make the most of the few hours of day between a workday and bedtime, it's about how she grapples with those urges against just saying "fuck it" and staying in (that would be "Recluse in the Making." There's also "Coming in Last," which is about what you think it's about, and there's "Dry Socket," which might be about dental wellness.

Ultimately though, the license plate gets it right. Bless by Psyche is more of the good stuff from Sincere Engineer, a slightly more put-together second effort that makes up for lost grit with a recommitment to telling it like it is, no matter how bad.

Face To Face: No Way Out But Through

The Wallys: Give It Back