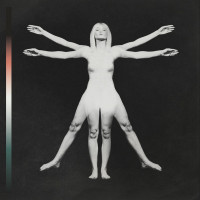 If you’ve been a fan of Tom DeLonge and read his recent press on Angels and Airwaves’ new album, you’ve heard the former blink-182 bandmate is having a bit of a moment. Headlines trumpet his rekindled friendship with Mark Hoppus, vindication for his To The Stars transmedia company which successfully forced the government to admit aliens exist, and most notably a renewed DeLonge sitting down to ostensibly talk about his music. Something that has led him to publicly quit his former band. He genuinely sounds excited about discussing Lifeforms in a way that he has not since he first left blink-182 on his new journey.

The truth of the matter is Angels and Airwaves have one good album; their debut We Don’t Need To Whisper. The album served as much as a capstone blink-182 project as it did a new band despite DeLonge’s off putting comparisons to U2 at the time. Since then, Angels and Airwaves has served as a vehicle to keep DeLonge's musical career relevant if not the band’s actual music. That began to change on 2014’s Dreamwalker with the addition of Ilan Rubin, a former protege of Travis Barker and musician extraordinaire who also drums for Nine Inch Nails. It finally forced DeLonge out of the boring comfort zone he found himself in sans Hoppus and Barker.

Lifeforms makes good on what was hinted at in their first collaboration. Rounded out by longtime guitarist David Kennedy and bassist Matt Rubano, Angels and Airwaves sound the tightest and most fluid in their own sound as they ever have. The album finds the band grounding their sound even firmer in 80s new wave elements drawing comparisons to Depeche Mode, an influence DeLonge has cited in interviews. It also brings a new energy to the collection of songs only seen on some of the band’s more accessible singles off previous records. This allows DeLonge to let his vocals fall more inline with the cadences he used in his halcyon blink days.

“Timebomb” welcomes the listener to the record highlighting all of these things, but it’s “Euphoria” where they coalesce. The song starts off with a riff that wouldn’t sound out of place on a Boxcar Racer album that crashes into drums that wouldn’t sound out of place coming from Barker himself in their hip-hop influence. DeLonge sounds more animated than he has in years as he snarls out, “The enemy is unguarded / So let the motherfucker know his times run out.” The song kicks off one of the strongest runs of songs DeLonge has offered on any of his post-blink material.

“Spellbound” is next, leaning directly on the band's new wave influences. It has DeLonge singing his signature nursery rhymes over electronic beats and glitches that make for a pretty decent dance song. “No More Guns” has a pop-punk stomp to it that sounds like the band trying out some Clash styled energy albeit with a much more modern flare. “Losing My Mind” is another song straight from the 80s that demonstrates all this time DeLonge was obsessing over U2 publicly, someone should’ve handed him a New Order album. “Automatic” should connect with anyone wanting to hear what a straight up pop-punk song would sound like in 2021 coming from one of the most publicly associated figures with the genre.

Lifeforms doesn’t really ever lose it’s footing over its 38 minute runtime. Because of past Angels and Airwaves albums topping out much closer to an hour, the focused attention allows even some of its weak spots to be overlooked. “A Fire In A Nameless Town” falls into the more boring spectrum of their discography. Even still, the misstep is quickly forgiven because of its couched position between “Rebel Girl” and closer “Kiss & Tell.” The closer is another more rock aligned song that allows DeLonge to excel as a vocalist. It should be stated that one of the bigger upgrades on this album is a more relatable set of lyrics on this album which make the hooks throughout the album pop more than on previous efforts. Much of it covers the uncertainty of the last few years which happen to coincide with a divorce and new marriage from DeLonge.

DeLonge’s tangible excitement is not misplaced with Lifeforms. It is the only worthwhile offering by Angels and Airwaves since their debut and worthy of the musical legacy DeLonge built with his more famous bands. Too often Angels and Airwaves has been associated with the more manic and less grounded side of the frontman. This album has Delonge reconciling his pop-punk roots with his more loftier musical ambitions. It’s a welcome return to almost form ahead of what I’m sure is the inevitable blink-182 reunion being hinted at more publicly with each passing article written about him.

The Wallys: Give It Back

Every Time I Die: Radical