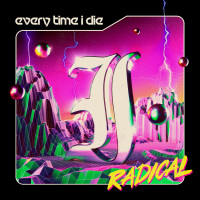 I know for a fact at this point that I’m not the only person (far from it, in fact) who is of the belief that a new ETID record could well be the thing we’ve all been waiting for. Low Teens landed 5 years ago now and it is also demonstrably true that the last 5 years have, for the most part, been a shitshow of almost unimaginable proportions. I’m not saying that the relative fortunes of the entire planet revolve around the music of ETID, but if, in a Bill and Ted fashion, the future of the galaxy was to lie in the hands of any band on the planet, I’d want ETID to be in that conversation. Bombastic, yet capable of great subtlety, able to churn out pit-baiting bangers that also carry complex and nuanced messages; but most importantly (in this context, at least) ETID are surely as consistent a band as the alternative music world has at this point. So. Five years down the line from the critically acclaimed Low Teens, are ETID here to save the world?

I don’t think they want to, to be frank. And that might be the most thrilling thing about Radical. I for one had some reservations when I heard this would be a double album. The heavy music world is not replete with double albums that have justified themselves, never mind gone on to be classics. And sixteen tracks of almost anything can be trying, so let’s consider the realities of this record for a minute. Every Time I Die are a hardcore band. Maybe not a basketball shorts and two-stepping, wilfully ignorant hardcore band, not even an NYHC band despite being from Buffalo, but they are a hardcore band. They don’t fuck about. The tone might be wirier, the structure might be less conventional, the lyricism more infused with analogy, simile and metaphor, but their music is no less capable of ripping your face off than anyone else in the scene you could care to mention. In this, they are arguably alone.

The reason I labour this point is because a hardcore double album seems like madness on the face of it. But this record seems to make sense of the concept. It’s not wildly diverse, but meanders powerfully whilst channelling everything that made ETID so potent in the first place. The record does visit different and disparate places, sonically speaking, and as much as the band are responsible for some of the most impressively expansive hardcore‘n’roll canvases I’ve heard in forever, it’s Keith Buckley that makes every minute of this double record feel essential. Buckley is a man with a gift. A gift for unexpected, effective and affecting vocals. Complex metre, cadence and vocabulary all seem to come to him entirely naturally. They seem to submit to his will in the most organic and enthralling way. Such is the visceral delivery of his message, it sometimes seems hard to believe that they’re not being vomited forth by some poor unfortunate who has been afflicted by the unlikely combination of demonic possession whilst still retaining the host’s qualities; assuming the host was the result of a gene-splicing experiment involving Scott Weiland, Oscar Wilde, Ronnie Van Zant, Jack White and Liam Cormier.

I can’t pretend it’s where my enjoyment of this record lives most frequently, but it is arguably when the band step furthest beyond the realms of their perceived comfort zone when they’re the most impressive. Closer “We Go Together” incorporates synths, rapid-fire, furious vocals, anthemic melodies, a riff that most bands would drop in track 2 or 3 as opposed to 16, and a general disregard for what people think they are or should be as a band, which doesn’t show ambition so much as confidence in their ability to do whatever they turn their hand to, to an exceptional standard. I don’t think I know anyone who has properly listened to ETID who doesn’t love them and this record certainly won’t alienate those of us who are already in this boat, but whether a 16-track double album of hardcore songs dealing in sometimes opaque and sardonic ways with the ills of the world whilst also trying to offer the vestiges of hope by way of savage, enlivening catharsis? Who knows.

I don’t know what to tell you. It’s so good. It’s as good as I’d hoped it would be, yet I’m not even vaguely surprised. Keith losing his shit in “All This And War”, the gentle strokes before the unforgiving slaps of “Thing With Feathers” (complete with Andy Hull of Manchester Orchestra guest spot) and the (at this point) well-documented pure adrenaline of “Planet Shit” or “Colossal Wreck”. The record is simply overflowing with songs, moments, lyrics, riffs that are absurdly memorable. I bought my ticket for the upcoming tour well before I heard this record (of course I did) but at this point, I can scarcely imagine the sort of night that this record could produce. They’re not Bill and Ted. Because Bill and ted couldn’t play. And when they could they played KISS. If a band is capable of saving people’s lives, one show at a time, then I’m pretty confident ETID are the ones.