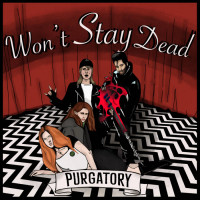 Every season has music that fits best with it, that matches the weather and vibe in the air. The newest entry from Won’t Stay Dead, Purgatory, is absolutely autumnal. From the whole horror aesthetic, the mix of fast and catchy tunes interspersing with darker, more somber material (just like the warm days mix with the chilly), to the spooky storytelling of standout “Somebody Put a Cross on My Head (And It Burned),” the record just screams October. Opener “Window Shopper” gets everything started, establishing how the record is gonna go. It's mostly gonna be quick, but we can play around with the pace. It's gonna be melodic and catchy, with some fun riffs. The vocals are gonna be killer. It's gonna have some dark tones, which match the eerie aesthetic Won't Stay Dead has going on. Won’t Stay Dead is consistent with this pattern across the (unlucky number?) 13 tracks here. There’s also a ton of sound-clips interspersed throughout, which adds some fun to those songs, enhancing the mood.

Songs like “You Will Kill Again,” “The Ugliness of the Human Spirit,” and “Vacant (This Is Ten)” are all fast-paced, melodic, catchy songs. Sound-clips feature prominently. The vocals, frequently with great harmonies, are all fantastic. They’re some of my favorite songs here. They’ll go over wonderfully live. But hewing so close to such a finely-crafted formula is both a blessing and a curse. It’s easy for songs to kinda blend together and it’s only when listening back through them do the highlights hit you and remind you how great they are, like for example the bridge in “The Ugliness of the Human Spirit” or the riff game in “Vacant (This Is Ten).” But there aren’t really lows because of that as well.

While there’s a consistent pattern established, and it rocks, some of those that deviate are the highlights here. The minute-and-a-half ripper, “Dig In,” is absolutely frenetic, and even crams a quick little solo in there. It’ll get a crowd moving for sure. “Purify” is a slow, danse(able) macabre tune, at least until the last forty seconds or so, when it really starts speeding up and gets intense. Playing with diverse tempos like that is one of the record’s strengths. “Somebody Put a Cross on My Head (And It Burned)” is notable for its straight up storytelling nature. That bridge in “The Ugliness of the Human Spirit” really is fantastic. I’m a sucker for “whoas” and they’re utilized perfecting adding some haunting background in “Dead Lungs.”

One of my favorite parts about Purgatory is the directness of the vision. Bandleaders Saffron and Violet, who both handle vocals (and again, the vocals here are impressive), along with bass and guitars, respectively, have collectively composed with Won’t Stay Dead the pinnacle of their multiple bands’ back-catalog. Seeing them around the Chicago scene for years, first as When Flying Feels Like Falling, then Ultrahazard, before forming Won’t Stay Dead, everything here feels natural; it’s a progression you could see coming cause they’ve been hashing this stuff out for years. It’s quite an accomplishment to craft such a consistent record that matches a vision as perfectly as Purgatory does. Won’t Stay Dead is at the top of their game and I’m excited to see where things go next.