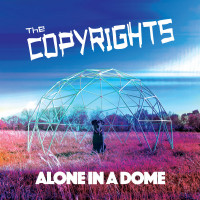 I’ll have to admit right away that I’m just a casual listener of The Copyrights. I have a couple of their records, but I don’t know the band well enough to give a profound synopsis of the band’s history and discography in comparison to Alone in a Dome, their first album since 2014. But what I can say is that these 12 pop-punk songs have convinced me that I should definitely take the time to check out the rest of their albums.

While listening, it’s hard to ignore the overall tone of the record, starting with the cover art. The listener can’t help but experience that familiar feeling of being stuck in a small town rut, growing old, and falling in and out of love. With lyrics like “we talk all day about moving away, but we both know we’re not going anywhere” (“On Division”) and “this cold, it makes you feel your age”(Stuck in the Winter) are accompanied by unpredictable, off-kilter chord progressions that offer a slight dissonance.

Despite this though, with a bit of patience, this feeling is often alleviated with catchy melodies and motivating lyrics like “we’re gonna make it through the night” (“That One Week”). Take the first track, for example. “Part of the Landscape” sets a rugged tone right away, followed by a longer than usual verse causing a bit of anxiety, which subsides when the super catchy chorus kicks in. And these sing-along moments are scattered generously throughout the album, making the album sound like one big party, which is a welcomed juxtaposition to the underlying tone of the record. Partially because of this, it’s difficult to figure out which parts are the verse and which parts are the chorus in many of the songs. “Halo”, a quick burner, is a pretty good example of this where the verse sounds like a chorus and the chorus sounds like a verse, topped off with a gang vocal sing-a-long at the end.

Most of the songs are mid-tempo, yet the album provides just enough speed changes to keep the listener engaged without getting erratic, showcasing an ability to play a wide range of punk genres. When the band does slow down the tempo slightly, the aggression remains. And oftentimes, the band strays away from the typical pop-punk song structure,  forcing us to pay attention. There are times when the band sticks to somewhat of a traditional song structure, but this is rare on this record. More often than not, as I listened more intently, I said to myself, “oh, that’s a little different” or “oh, I didn’t really expect that”. In spite of this though, the album is still a relatively natural listen.

Overall, I suspect that this record is a welcomed return for most fans of the band. It is well-written and well-thought out. And it’s clear that the band takes pride in what they do. And now I’m eager to dive a little deeper into their back catalogue.