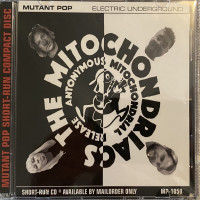 The Mitochondriacs came together earlier this year to create a handful of digital singles of fast and fun punk rock. All proceeds of these singles were donated to various humane foundations such as The Life You Can Save Foundation, Thrive and The Bridge Youth & Family Services. For those who don't know, founding Screeching Weasel member John Jughead handles lead vocals and guitar duties in this project. He is backed by longtime Chicago Ramonescore band the Kobanes. Mutant Pop is releasing this collection of digital singles as part of their short run CD series along with two additional tracks exclusive to this release. Given the resume of the members involved, the output is really no surprise. The Mitochondriacs take us on a wild and fun journey.

The lead of track "Love" is a straight-forward pop punk track which you would expect from this band. This song features catchy backing vocals which remain present throughout the CD. Jughead sings about making Japan his home for the one that he adores. The flipside to their debut single was "Hate" which shows the band taking a harsher approach. This track features a powerful chorus along with very quick chord changes. Off the bat, the Mitochondriacs prove their versatility. "Never/Always" boasts a strong midwest punk sound. Backing vocals are strong and present on this straight-forward rocker. This song which tells the story of never being "too" punk rock is not unlike fellow Chicago veterans the Vindictives. "But Sometimes" sounds like the Ramones on speed. Bassist Maria Surfingbird's dual vocals help accentuate this track. "Happily" sounds like it could have been lifted from any mid-90's Screeching Weasel LP. This instrumental track has all the classic elements of Jughead's former band. The classic guitar leads are present throughout. Drummer Eddie Pignataro IV is thunderous on "Disappointed" which is my personal favorite track of the set. This number hits like a freight train full of passion and aggression. Thunderous vocal screams of "Fuck Fuck Fuckity" will stay in your head for days. "I Want It All" is another Ramonescore number complete with quick chord changes and repetitive lyrics. Pop punk veteran Grim Deeds lends his backups on this track. "Of Nothing" closes out this debut physical release. This track starts of acoustic and features Nanako Nishio on piano. This emotional track deals with questioning love. The full band kicks in halfway through to remind the listener what the Mitochondriacs are all about.

This impressive debut release is worth your listen. Any pop punk or Ramonescore fan should take note. This is a fun and quick listen that checks all the boxes which you would expect hearing of a new punk rock band involving Jughead. Marky Kobane who also plays guitar did his magic with mixing and mastering this release. Time will tell if this will be a one off project or a full time band. Put this on and remember why you first fell in love with pop punk.

The Copyrights: Alone in a Dome