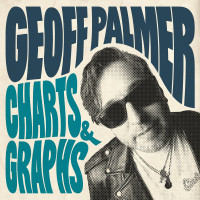 I remember a couple of years ago, I started to see Geoff Palmer popping up all over the place. He seemed to appear from out of nowhere. People were talking about him like he was some kind of a punk household name. All the while I’m thinking, who the hell is Geoff Palmer? Then someone told me he was Geoff Useless, which set off all kinds of bells and whistles.

Useless played in both The Queers and Nobodys. He was also in lesser known New England bands like The Guts, She’s a Guy, The Connection and a bunch more. Over the last few years, using his proper Christian name, Palmer has been carving out a pretty damn respectable solo career. He mixes pop punk, power pop and Americana, and writes some very catchy songs.

Not only are the songs catchy, but they’re self referential. I love that shit. Opener “Many More Drugs” is a funny story about a misheard Dickies lyric. “This Monkey” has The Pixies written all over it. “A Hard Day’s Life” is obviously an homage to The Beatles and Bob Dylan, but it’s also the closest thing to a true punk song. “What Would Paul Westerberg Do” references more Replacements songs, both musically and lyrically, than you can shake a stick at. There are also at least two separate references to the John Prine song he covered on his last album. You get the idea.

“Don’t Be” is the most profane track on Charts & Graphs, but it’s no Queers or Nobodys song. (Don’t expect any snotty punk songs about big boobs or juicy asses.) The title track is a clever breakup song. “Count Me In” dreams of drinking with dead rock and roll heroes. “The Apartment Song” has an undeniable familiarness, and would probably be a big country rock hit in some parallel universe.

If you’re still wondering who the hell Geoff Palmer is, it’s time to find out. Charts & Graphs is one of the best albums of 2021. For a punk, this might be what aging gracefully looks like.

Big D and the Kids Table: Do Your Art