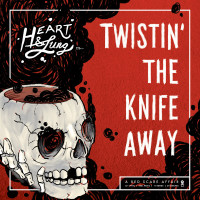 Cleveland is not a particularly cool city. I say this as someone who grew up there. It doesn’t have the flash of big cities, it’s intentionally disinvested from, and its mayor even noted its perception as the “butthole of the world.” However, as a young punk kid stuck in Cleveland - which so happens to be placed between Chicago and the Northeast corridor - one of its bright spots was its touring scene. Cleveland was not a market to be missed and given its placement between some very strong regional scenes, bands from the city bled influences from all over the Northeast to the Midwest. A likely product of nearly every 2000s pop-punk, power pop, and punk rock band playing at one of the city’s many historic punk venues.

Enter Heart & Lung. The Cleveland four piece is a constant feature in the local scene who have released Twistin’ The Knife Away, their second overall full length. The album is a clear product of a Cleveland scene that served as a buffet of punk for its receptive fans.

Twistin’ The Knife Away is a fun slab of 27 minute power pop featuring three part vocal harmonies, an affinity for quirky guitar leads, and a welcome lightheartedness making this one of the most fun records of 2021. Pop-punk fans might have flashbacks to the early Drive Thru Records days of Allister. “I’m Fine” shows Heart & Lung can put forth a melodic and aggressive song to great effect. The album has moments throughout that wouldn’t sound out of place on Dead Ends & Girlfriends. “Shit Together” is another example of this utilizing all three vocalists in a call and response verse that ends in a shared harmony with the band singing, “I don’t know if I ever / Will get my shit together.” With “Shit Together,” we also see Heart & Lung’s originality in their affinity for guitar leads that can spin a song into multiple directions by pulling in influences.

What makes this record unique is the band’s ability to blend those influences from all across the punk spectrum while still being unique to their power pop foundation. Opener “Watch You Suffer” is on the harder spectrum of what the band offers with a kick ass instrumental breakdown demonstrating all the players intermixing chops. It rocks like some of the last material from The Holy Mess. “Never Come Home” is another gritty punk song in that mix with complimentary background shouts of “woah-oh-ohs.” A song like “Headache” is a master class in writing a hook. Opening with two complimentary yet competing guitar lines, the song is a two minute ode to a hangover. The song even builds those country guitar bends The Ataris used to make work on End Is Forever into it. Short blasts of more straight ahead pop-punk like “Die Alone” and “Caveman” are easy to welcome comparisons to Teenage Bottlerocket too.

While Heart & Lung touch on topics that are sure to relate to any 30 year old punk who’s contemplating how long they can actually be a punk. “Punk Posters” is a great example of this. The song is in the aftermath of a breakup that finds you with some empty walls and closets full of Kid Dynamite posters that your partner made you store away when they moved in. It’s also catchy as hell and you’ll be singing its infectious chorus for days. “Call me tonight / Now that it’s over / Putting up all my old punk posters” goes the chorus with three part harmonies repeating that last line. It’s the type of ‘it is what it is’ acceptance of knowing you struggle with what constitutes concepts like business casual. You mean this Lawrence Arms shirt isn’t professionally appropriate? But I’ve been wearing it since I was 15 and no one’s had a problem until now.

Music is meant to be fun. A lot of punks share that sense of arrested development. Heart & Lung exemplify that with Twistin’ The Knife Away. Its hooks will knock the cynic out of you. It makes sense that Heart & Lung can easily do that because if you were made in a town like Cleveland, cynicism can only get you so far.

Big D and the Kids Table: Do Your Art