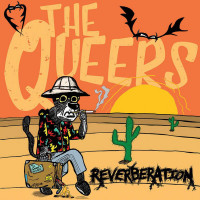 This is a weird one. The Queers have recorded a ton of covers over the years, but other than the entire Ramones’ Rocket to Russia record, of course, this is their first full album of covers. Why now? It’s been accused of being a cash grab, but is there really that much cash to grab? And if there is, who could begrudge an aging punker grabbing it? Anyway, Reverberation is also The Queers first album for Cleopatra Records, who have been amassing a diverse roster of over-the-hill punks.

The thing is, Reverberation works. The Queers have the same undeniable pop sensibility that runs through most of these ‘60s classics. Joe King and the gang have always worn their love of the Beach Boys on their collective sleeve, so “Be True To Your School” is a no-brainer. Ditto “Dead Man’s Curve” (Jan and Dean). “The Kids Are Alright” (The Who) and “(I’m Not You’re) Steppin’ Stone” (Paul Revere and the Raiders) are regularly revved up and covered by punk bands. These versions are great while sticking pretty close to the original arrangements.

Golden oldies “With a Girl Like You” (The Troggs) and “Love Potion #9” (The Searchers) are highlights. The two best songs are excellent takes on “Valleri” (The Monkees) and “Strychnine” (The Sonics). A few of the other songs are less familiar, but are solid none-the-less. The oddball track on Reverberation is the Queer/Weasel penned “See You Later Fuckface”. While it’s a fine Queers’ song, it’s the only profane track on an album that your mother could otherwise enjoy.

The cartoon artwork is kind of a head scratcher, but it will grow on you. Ultimately, the Hunter S Thomson imagery and bright colors will win you over. This is the second Queers full length in as many years, after a decade without much new material. It’s nice to see them productive again. As I mentioned earlier, this is a weird one. Reverberation has got a surprising amount of replay value. As an artistic statement it’s maybe a 5/10, but for pure listenability is more like a 9/10. I guess we’ll split the difference.