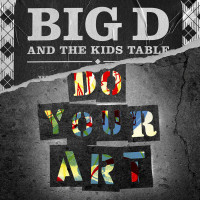 Boston's Big D and the Kids Table spun out of isolation, carrying a fresh new take of what made us fall in love with them in the first place with Do Your Art. While their mighty discography, entering its eleventh installment, has taken some needed deep breaths of dancehall homages and melodic focal points over the years, Art is invitingly more symbolic of the pent up energy, fun, and infectious randomness that you would have found on 1999's Good Luck.

The album rips open with the (they are all pretty short) double-time banger "Dead Bottle," attaching a punk rock drinking game to early single "Too Much," laying the groundwork with lyrics mocking 25 year singer/lead songwriter David McWane's most negative vocal reviews in a ska classic. The epic horn section's composition of "Toyed" follows, along with "Sociopath." Each bpm of the openers inching a little faster, much like the outfit's earlier days, sneaking onto multiple Warped Tour stages a day just to shove a few more devoted fans into their pocket before sunset and the next merch tent.

This brings "How About a Pizza?" which channels some (over-)sampling and record scratches from McWane that Big D fans have missed since How It Goes, which was released over 17 years prior. "Metal in the Microwave" and "Med Her Lazy" fucking shred, showcasing 2017-present's Alex Brander. The drummer is able to dominate the pockets of classic skate-punk precision that would have been missing from prior stick-holders during 2007's Strictly Rude through 2013's Strole eras (both in the studio and on stage.) Yet as the dust settles into two-tone standard "New Day," Brander breezes on with the needed shift of expertise and reserve.

"You Buggin'" is a 49 second collaboration with Melt-Banana, and while wonderful, could have been a bit longer as over half of the song was an intro, maybe they had a plane to catch. "Teenagers From Outer Space" sews more samples into the more dance-hall "Lost in London," and resolves nicely with two Doped Up Dollies collabs in "Beautiful Way" and "Strong & Fair." This revisits the later years of easy-going Dollies/Big D material without it being crammed into an entire record, and is an amazing break before the album steers its final turn.

"Tripping Over Shoelaces" screams classic 2002 "The Gipsy Hill EP," and I get it, the line-up has molted substantially in the last two decades, but as "Dispirit," [pause for another sample track that mentions PBR,] and "Militant Humorist" march on, this is a Big D line-up that has an appreciation for a sneering group of horn-players set to stack up against such greats as the Bosstones or Streetlight Manifesto, and their attention to the "classic Big D" horn section is uncanny... also some of them are (hopefully) still young enough to sleep on wood floors across the country so we can witness live music.

"Forever a Freak," also a Dollies collab, is about as close as the band touches on "Noise Complaint" party territory, and the result is fantastic. The album ends with "Race Car Song," which, while quite stupid, was engineered in such a sonically brilliant fashion that you can see the circle-pits when you close your eyes, this with the outro samples of "Danny and Nannie" complete the thesis of Do Your Art in a spectacular way. Ska will never be "back..." at least not in the tired ideological sense, but Big D is certainly back as usual with this release, and it keeps getting better after every listen. Much recommend, Big D forever.