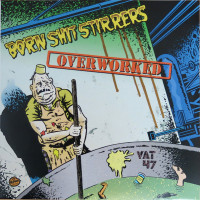 At the very least, this has to be the best name for an EP this year. Overworked Underfucked pairs English/Japanese band Born Shit Stirrers and the unfortunately named American/Japanese band LedZepVietCong.

BSS jumped onto my radar last year with the refreshingly raw, funny Lester LP. On the A side of this split seven inch, they pick up right where they left off. There are five fast, chaotic songs with lyrics that could make a sailor blush. It’s also got an impressive list of guest musicians. Mike Watt plays bass on all five tracks. Rev Norb from Boris the Sprinkler adds his easily recognizable voice to Richard Gere. (That poor hamster.) Joe Queer pitches in on “Sit On My Face Kyoko”, and that’s not even the funniest song title on the record. That honor goes to the opening track “This Machine Kills Cockblockers”. “The Plural of Vinyl is Vinylses” clocks in at an impressive one second.

As for the other side, LedZepVietCong do four songs of a more fuzzy, lo-fi, garage punk thing. “Lonely Walls” has minimal lyrics and a sort of off kilter jangle. “Liquored Up” is a song about the evils of alcohol, and is the star of side B. “Island Hopping” has a groove that will make you want to shake your ass. “Kin Mugi Motherfucker” tries to keep up with BSS in terms of sheer bad taste.

The two sides of Overworked Underfucked are a nice contrast, but still work well enough together. Some great cartoon artwork helps tie everything together too. Overall, this is a fun one from BSS and LZVC.