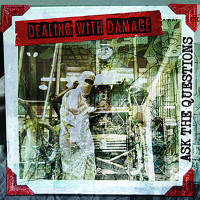 Dealing With Damage is a band made up of UK punk veterans, and led by vocalist/guitarist Ed (Shred) Wenn. Wenn has been involved in the English punk scene since the early ‘80s as a guitarist, singer, producer and even visual artist. His various credits include bigger names like Billy No Mates, Stupids, Shudder To Think and Hard Skin, plus a bunch of things you’ve probably never heard of. Ask the Questions is the London band’s first full length.

The most obvious musical influences on Ask the Questions are the post punk of Mission of Burma, the overdriven sludge of Husker Du and the melodic fuzz of the Buzzcocks. The basslines would make Peter Hook jealous. The guitars crunch and shimmer. The lyrics are generally political, but are more thoughtful than preachy. The main theme seems to be economic inequality. This record definitely has more substance than most.

There are quite a few highlights across these 16 songs. Opener “Stop Everything” sets the stage for the relatively straight forward side A with its propulsive, distorted riff and swirling lead guitar. “No Money In Peace” and “How Much Will We Let it Affect Us” follow the lead. “Strange Melody” closes the first half and might be the catchiest track on Ask the Questions.

Side B is a bit more experimental. Opener “Sharkbait” balances its aggression with some organ and acoustic guitar at the end. Over the next few songs you will also hear slices of dub reggae, something that approaches rap, and some samples. “Some Colours Never Fade” recalls a time when people still believed in punk as a social movement that could actually make a difference in the world. (Rather than a commodity that could sell shoes and energy drinks.)

The oddball track comes in the middle of side B. “For Barbara Dane” is a folk punk protest song. It’s a bouncy little number that most prominently features acoustic instruments and piano. Honestly, it sounds more like a Frank Turner song than a Dealing With Damage song. That will no doubt excite some of you while disgusting others. The surprising musical diversity makes the record easy to listen to from front to back.

Ask the Questions is definitely a musical tour de force, but more importantly, it has a true punk spirit. When’s the last time a punk band really encouraged you to think for yourself? To actually consider your position on something? These days, everyone is expected to think the same way. Somehow, punk politics have become mainstream politics. I may not agree with everything Dealing With Damage have to say, but I am forced to respect their well thought out opinions.