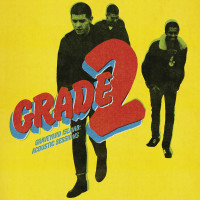 Grade 2 were a bunch of snot nosed kids when they burst onto the scene in 2013, teenagers playing the type of classic punk that belonged to another era. While still young by most standards, with three full lengths and a handful of EPs under their belt, they’re now grizzled scene veterans. The Isle of Wight, UK trio was on quite a roll with the release of their Hellcat Records debut Graveyard Island in 2019. Like so many other bands, their momentum was threatened by the pandemic. Their response was Graveyard Island: Acoustic Sessions.

The self recorded, six track EP reimagines five of the songs from Graveyard Island. Opener, the frantically strummed “Only Ones I Trust”, is new, and might be the best song on the record. Grade 2 add the punkest instrument of all, the xylophone, to “Tired of It”. “Don’t Look Back” has an Americana sound, even if the topic is very British. “Bowling Green Lane” really accentuates its strong harmonies. “Murder Town” was a highlight of Graveyard Island, and it is here too. Closer, the optimistic “Look Up”, goes full honkey tonk with its rollicking piano.

There’s no denying it - Graveyard Island: Acoustic Sessions shows a more mature side of these three young guys. Stripping the songs down also showcases their ever improving songwriting. (They did get some help from Tim Timebomb and Jesse Michaels.) If you’re unfamiliar with Grade 2, you should probably start with Break the Routine or Graveyard Island. If you’re already a fan, you’ll no doubt enjoy this entertaining supplemental material while you wait for the next proper electric release.