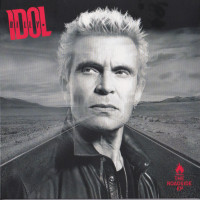 Well, he still has got it. Billy Idol’s Roadside was delivered without much pomp and circumstance, so it seems that Billy just want to knock out a few fun rockers or Darkhorse Records (who has been releasing Joe Strummer material as well) wants to keep the first wave punkers in the mix. Either way, the release is exactly what you think it might be- Billy Idol’s classic punk-meets-rock-meets-pop sound pushed into the current age.

The nice thing is that Billy idol still is BILLY IDOL. At his core, he writes with an ear toward fundamental pop structure. Opening fist pumper “Rita Hayward” charges forward while being a compact thumb snapper. As he has done before, lyrically, he calls back to an earlier age in a way to avoid the question if he’s too old to be rocking. He’s not, but it’s a smart move. In the early 80s, Idol was the face of the “now generation,” but now he’s the sort of timeless rock avatar that Dave Grohl only wishes he could be.

“U Don’t Have to Kiss Me Like That” is propelled by a bumping synth that references hits like “Blue Highway” and “Eyes Without a Face.” What’s interesting is that even while the song is firmly in the retro-pop territory (which ironically, is the sound of modern pop), he treats the song like it’s a rock jam, both in lyrics and delivery, and that very well may be the key to Idol’s early success. Of the two ballads here, “Baby out your clothes back on” is the one that approaches greatness. It might not have quite the psychic heaviness of songs like “catch my fall,” but, even while Billy is clearly playing a character, it feels like an earnest lament about the difficulty of relationships.

Producer Butch Walker handles everything here except the vocals- guitars, bass, drums, production, engineering. Everything here is loud and pumped out, and thankfully, Walker is able to shiow that Billy still sounds great. That being said, as with most modern records, the sound here is waaaaay over produced. It sounds like everything has been sounded down to the point where instruments tend to melt together and it can actually be hard to hear what is going on at some points. It doesn’t ruin the release, but it does make it sound vastly different on different unites. (i.e. the EP actually sounds really good – if not a little too slick- on my home stereo, but on my car stereo, it sounds watery).

Never the less, there’s something comforting that Billy Idol is still the shock blonde rocker. That is, if you can count on Billy Idol to still be Billy Idol in 2021, maybe there is some consistency in the world and the universe.