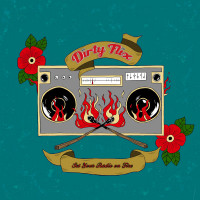 The members of Dirty Flix first came on my radar last year when they were previously known as the Lettermans who played their own brand of power pop and pop punk. This Pennsylvania band has turned up the dial on the power pop, added a touch of raunchy rock n roll, and changed their name. Earlier this year, the band got the chance to work with Queers founder Joseph King who produced Set Your Radio On Fire, the debut album by Dirty Flix. If you like more "Rock" in your "Punk Rock" than "Punk" then this album is worth your time. This is a healthy mix of garage, punk n' roll, pop punk, glam and everything in between.

"Bring Back Rock n' Roll" sets the pace for this roller coaster of an album. The band kicks right in with powerful vocals and riffs. An infectious guitar lead comes right out of the chorus. Though from the east coast, this feels right out of the Midwest and bands like the Dead Boys or Cramps. The outro bridge to this track is as ambitious as it is bombastic. The debut single "Hollywood Dreamgirl" has all the elements of a true hit song. It begins with a catchy guitar lead that sets the tone. This radio friendly track will be stuck in your head for days. Very simple and effective leads along with great vocal harmonies carry this track. "Cauffield" is more of a mid-paced mod rocker similar to the Jam. Subtle guitar leads can be heard under the verses. The powerful Jags cover "Back of my Hand" follows. For those who don't know, the Jags were a seminal 70's power pop band. Dirty Flix do this track justice and sells it as if it could have been their own. "I Agree" is a song about breaking up. Vocalist Robert Bratt presents very clear and visual lyrics on this number. The New York Dolls inspired "Dying of Boredom" is up next. This glam rocker of a tune is all about the desire to get out of a relationship. Clocking in at over four minutes, this song stands out as the longest song on the album. Dirty Flix slows the pace on "Nothing New." This steady glam rocker will take you back to the Sunset Strip in the 80s. Solid backing vocals are heard throughout. "Backup Plan" channels early Groovie Ghoulies and 1980's Ramones. This is a great sing-a-long track. This is complete with many tasty guitar leads. Dirty Flix does a great job of cleverly matching their musical patterns to match the lyrics. This method is specifically present on "Without You." This helps to accentuate the vocals which are especially clear and audible. Drummer Justin Two Times beats the skins loud and proud on this number. "Jukebox Queen" showcases Bratt's vocal range and abilities. Impressive vocal patterns are heard throughout. "Wrecking Ball" is the perfect closer to this initial offering of Dirty Flix. This track has it all from a solid guitar intro, lyrics about a girl and loud vocals. This track properly summarizes what Dirty Flix are trying to accomplish.

Dirty Flix have graced us with a most impressive debut album. The switch from pure pop punk to punk n' roll fits them like a glove. One can easily hear the vast amount of influences to them as both fans and musicians. This was not some overnight change in plan or direction for the Lettermans. Rather, this is growth and development in building onto an already solid foundation. This is highly recommended for fans of everyone from the Stones to the Stooges to the Ramones to Cheap Trick and beyond.