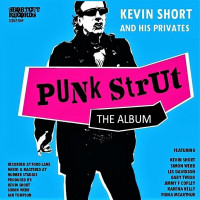 Kevin Short And His Privates

Time for a history lesson. Most likely you have never heard of Kevin Short or his band the Privates. I previously had not. Back in 1978, the band produced what was considered a parody punk single entitled "Punk Strut" which details a hot new punk rock dance. Fast forward 30 years, and the band reunites with all original members. This reunion is documented in the Kevin Short produced film "Punk Strut : The Movie." This film follows the band as they rehearse and prepare for a reunion show. There are various comedy bits sprinkled for good measures. To accompany the film's US DVD Release, Kevin Short has released this accompanying CD that contains the original band's re-recordings of classics as well as new tracks. If you fancy the classic '77 punk sound, then this is certainly for you.

The film's namesake and classic single "Punk Strut" opens the album. This is a classic 1977 pogo punk style song if there ever was one. Kevin begins singing "Double Strut, Double Strut, Strut Two Three Four" to set the tone of the song. This upbeat single contains a moving bassline underneath all of the fun. "Short Cut" is the B-Side of the original "Punk Strut" single. This track takes more of a garage rock approach. This autobiographical song features amazing backing vocals. You will be singing "Long Long Lonely Roads Are Not For Me" in no time. The Privates pick up the groove on "Body Talk" which follows. The band keeps solid time in this number. Short's vocals are very similar to Knox from the Vibrators on this track. The band slows the pace on "Half Moon and the North Star." This track has a dark and early new wave feel. The drums carry this track on this eerie journey. The offbeat "But I Love Her" is the next track. This wacky number reminds me of the Damned at times. There are heavy drums throughout accompanied with the band doing quick stops. This unique track is a definite standout. The very comical and soothing "Have a Bath" follows. This slower number features a slow drum beat underneath subtle guitar. This is a song about trying to calm your nerves. I think we can all learn from this number. Kevin Short and His Privates return to straight up '77 punk rock on "Pray." This is a true snotty pogo punk anthem for the youth. This is a song of unity and love. The band slows down a bit on "I Want You More Than I Need You" which sounds like a song lifted from a movie soundtrack. This new wave tune is sung with a soft voice which really does a good job of showcasing Kevin Short's vocal range. "Punk Struttin'" closes out this eclectic and fun collection of tunes from the reunited Kevin Short and His Privates. Solid keyboards are heard throughout this playful number. Effective backing vocals add very well to the mix. This to me is the modern take on doing the punk strut.


I am very grateful for Kevin Short and His Privates reuniting after so many years to reintroduce the band to the punk rock world. I feel this project was a true labor of love for Kevin Short. This film and soundtrack close the gap on this long forgotten project. I highly recommend any punk fan to seek out the film. It showcases how hard work can pay off and make anything possible. Kevin Short and His Privates would also be a good introduction to the 1977 punk sound for those not familiar.