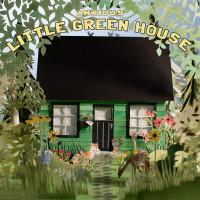 It's safe to say Run For Cover Records is a label that, personally, for over a decade I can't get enough of. Admittedly, over the years, they've been a bit inconsistent and experimental for my taste but a lot of that comes down to life getting in the way and me, as a writer, not being able to spend the time with albums as I'd to in order to expand my horizons. Luckily, they're still able to work with gems such as Fiddlehead, and come 2022, the New Year couldn't be kicked off any better with a kindred spirit of a band/album in Anxious' Little Green House.

Now, what I admire about this album a lot is it's just over 30 minutes and it doesn't wear out its welcome at all. I really dig records that have high-replay value, especially when I'm on the road and in this case, the diversity on tap offers a lot of what 36 year-old me looks for -- encompassing my older and newer musical tastes.

Off the cuff, it's easy to pinpoint bands like Moose Blood, Knuckle Puck, Neck Deep and Hot Mulligan stylistically as the first couple tracks emanate that harder edge of pop-punk. However, per tracks like "Your One Way Street" and "In April," there's a lot more depth involved, not just in the writing, but in how these songs quickly transition into post-hardcore/screamo elements. Sure, the band can float in the indie/alt. rock arena, but the best tag would be either if Title Fight went pop-punk, or if Citizen didn't get too shoegaze.

What's also refreshing is the tappy Midwestern vibe a la Tiny Moving Parts, which still has the anthemic charm of Oso Oso and the rage of Dogleg. "Growing Up Song" is a perfect example of this, as well as "Let Me" -- a song about divorce, which ironically has Pat Flynn of Fiddlehead on vocals too. At this point, you might even recall tones of Thursday and Sparta, which again, if you're not going to Las Vegas' When We Were Young Festival because of that one-day crowd and ridiculous price, you'd be inclined to show gratitude to new era bands for adhering to.

That said, I would prefer some more aggressive emo such as "Speechless" as I think this is their lane. It's not that they're not comfortable with the other songs, as they wear those musical skins so well, but I believe Anxious has a lot of cathartic energy to unleash in the form of an atomic visceral bomb. When they're catchy, they're really good, but loud, angry and shoutalong has a better fit.

Ultimately, what I think works well is the sense of balance but also, how the record is wise beyond its years. From the Sixpence None the Richer-esque acoustic in "Wayne" to the wispy, 90's-inspired dream-pop closer in "You When You're Gone," there's so much ambition here, as well as attitude, it'll be hard to ignore this when year-end lists are made. The latter in particular has me hooked on guest vocalist Stella Branstool at the moment, and all in all, Little Green House has provided warmth and comfort amid the chaos in the world, right when we're all looking for reasons to step back from the ledge.

Kevin Short And His Privates: Punk Strut - The Album