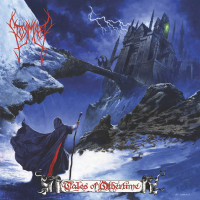 A couple of years back, Blood Incantation released Hidden History of the Human Race on November 22. An interesting choice given the music industry’s fetishisation of end of year lists (myself included), the anticipation surrounding it and also how incredibly complex, dense and involved the record is. But then I’m looking at this through the lens of someone who has to try and judge the quality of a record relatively quickly. And in the case of that record even more so than usual, as I was not lucky enough to receive a promo. As such, I had about a week to come to my conclusion and to submit my end of year list. At the time I think I made something of a compromise, in truth. I placed it fourteenth in my list. With the benefit of hindsight it should comfortably have been top 5, maybe top 3. Anyway, the point I’m making is that it’s entirely plausible that a similar situation could arise here. The record came out November 19th this time, but it features members of Blood Incantation and Wayfarer (amongst others) all of whom perform under pseudonyms in-keeping with the themes and style of the record.

If there was any question about the style (you’ll have seen the artwork by now) then we’re in the heart of medieval fantasy black metal. We’ve got wizards, citadels, storms, dragons, the full shebang. I have to say that this is not always the particular corner of black metal that I am drawn to. It can be, for want of a better word, a bit ‘Larpy’ for my tastes. What’s interesting with Stormkeep however, is that their absolutely unflinching commitment to their motif is unquestionably the thing that makes the record. As this was pitched as a side-project when I first head of, and listened to, Stormkeep last year, I confess I may have been slightly concerned that it may interfere with the writing and recording process of Blood Incantation. Whether this record has or not, however, is utterly immaterial. I say this as the record stands alone as something truly singular and remarkable in its completeness. Where I tend to disengage with the more melodramatic end of black metal is that it tends to strip away the excoriating ice-burn of its progenitors. But here, the riffing is lightning fast, the vocals are entirely authentic to the style but also the storytelling nature of the record. There are synths and solos at exactly the right points and an almost constant feeling of surging momentum, littered with medieval sub-melodies to root the songs squarely in their storyline.

For added contextual embedding (as if any were necessary), there are 2 instrumental interludes which might initially seem extraneous, but actually on repeat listens, really do pull you even further into the world Stormkeep have created. On which point, the CD/Vinyl also comes with a map of the world that this story takes place in. That’s the level of detail and commitment we’re dealing with here. Beyond those 2 instrumental tracks, there are 4 main tracks, ranging from around the 8 to 11 minutes mark. But to turn back to the instrumentals briefly, how effective “The Citadel” is at providing colour and texture to Stormkeep’s world should not be underestimated. Nor should the amount of skill that goes into the acoustic, courtier style of playing in “An Ode to Dragons”. It really is immensely impressive and immaculately deployed.

If I were pressed, then I would argue that some of the mix is a little indistinct. There are solos in both “A Journey Through Storms” and “Eternal Majesty Manifest” that are hard to appreciate to their full, even with good headphones. This is an odd quirk, as the production is otherwise very good. And not ‘very good for black metal’, just very good. Lush and deep, with a far more dynamic and more rounded feel than could have been opted for. It’s not altogether that easy to find further critical fault with the record. It’s also relatively clear from the way the record ends that Stormkeep are far from done. Next time, maybe they could just drop the record a little earlier in the year…?

Fucked Up: Epics in Minutes [reissue]