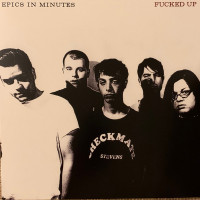 “This is the closest that there will ever be to a Fucked Up retrospective.” That’s what those cheeky monkeys in Fucked Up put on the bandcamp page for the re-release of Epics in Minutes compilation which by now, is almost… gulp… 20 years old.* Of course, that phrase was on the original CD release way back in 2003 on the Deranged records version. And also, of course, since then, the band has released at least three singles compilation albums, two compilation eps, six mixtapes, and an entire album compiling real songs by fake bands. The band has stated that they never expected to last beyond their first single and, when they started, served as a sort of experiment. But, the things with experiments is they often finish far away from whence they came and thankfully, Fucked Up isn’t finished yet.

No doubt it’s because the initial concept was so clever. The band’s early days was born out of tribute to Dangerhouse records, Negative approach, and obscure Canadian bands. But instead of simply doing homages, the band added in their own weirdness and fascination with esoterica. Obscure sigils and references to cult art movements abound in this collection of early singles. That’s a big part of where the power lies. Whereas many hardcore bands are literal to the point of parody, here, much like Integrity and Ink and Dagger, the band converses with you like you’re part of a secret occult club when really, you’re just some guy or gal that wandered in off the street. There’s an obfuscated intelligence here that adds layers to the music and is also a big part of why Fucked Up were THE mysterious hardcore guy band for a while.

But also, the riffs SMASH. The hard slamming of tracks like “Litany” and “Baiting the Public” can go toe-for-toe with pretty much any classic punk 7-inch you can find. Oh, and also, “Police,” which is one of the band’s unusual literal tracks- which with its circular narrative is almost a folk song- just straight up kicks all of the windows OUT. Fucked Up has gotten more nuanced and psychedelic in their later period- which is one of the main reasons why they have endured and thrived. But, without the straight up face smashers here, which were at times direct, they would not have been able to cut as deeply as they had later on.

While Fucked Up faced a period where they were accused of “leaving hardcore” – much in way Ceremony was attacked – the fact is, as these tunes show, the band was never “just” hardcore. That is, hardcore often prides itself on inexperience and youthful vigor, but here, even when the band was young, Fucked Up’s lyrics and music are locked in with a certain self-awareness and appreciation for the history of punk and art. And even more, when the band deviates from the formula of the history, there are hints that there’s much, much more to the band than “just hardcore.” What makes that so surprising is that, as it is, the tracks on Epics in Minutes are some of the best hardcore bangers of all time. If you don;t have this, it is essential listening.

The Get Better re-release sharpens the sound with a remastering, which maybe makes the track a little brighter and have a little more clarity. Surprisingly, “Dance of Death” is now paired with its flip side, “Zezozose.”** Also, the Get Better version is now on vinyl with the band’s demo set on a separate 7-inch. The cover art is also very slightly tweaked to fit with the band's now-established aesthetic. Overall, it’s a great presentation of an already great collection.

*Ready to have your mind blown? The time period between Ramones self-titled album and Rancid’s ...And Out Come the Wolves is the same time period as the original release of Epics in minutes and the re-release….

**In the original CD release for Epics, the band suggested that the versions of the sound recordings on the CD might be different than the ones found on the vinyl records. The re-release omits this spiel. I never could figure out the differences between the CD and vinyl versions, and always wondered if it was some obscure ruse by Fucked Up that referenced some other piece of record collecting minutiae.