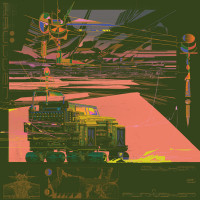 All roads lead to Chrome and only a few roads lead to Phil Collins, but Author & Punisher’s new album is the road that connects the two. For almost two decades, Tristan Stone has been a one-man electronic-drone band and he likes to make heavy, Sabbath-ish crunchers which are built off a base of machine sound manipulation. His records are always heavy and intense, but on the “group’s” newest album, they’ve never been this spacey.

Stone likes to take instrumental sounds and warp and disintegrate them with all manner of hi-tech and lo-tech devices. He does so much sound dismantling that his songs sound like they are out of an 80s sci-fi horror, and of course, that’s where the Chrome influence comes from (and much like Don Quixote, one can reference Chrome without even knowing Damon Edge and Helios Creed due to their massive, but underground, influence). But more than ever before, on Kruller the Stone explores an open expanse. The soaring sounds set of sinister buzzes and smashing make the whole release feel galactic and ominous- and surely, you can point to Pink Floyd, but whereas Pink Floyd kept a certain acid-warmth to their songs, this whole release has a decidedly cold, robotic position- almost like something inhuman trying to act human. To that end, one thinks of Phil Collins’ “In the air tonight,” with its Eno-ish cold, edge. That’s the strange energy delivered here, too.

Look at second track, “Incinerator” which opens with a massive roar only to drop down to a synth-buzzing. Once everything settles, Stone bleeds into the scene, his voice manipulated by machines. He acts as a sort of robotic Greek chorus, commenting on the human condition while seemingly not being human at all. Of course, you and I know that there really is a human behind the whole thing, but it’s interesting to try to look at ourselves objectively- and it also raises the question of why a human would want to NOT be human. There’s sci-fi fun here, but some real philosophizing, too.

Tracks like “Centurion” and the title-track again call back to Chrome-like effects with distorted vocals dropped over massively ripping or threatening riffage. But then, that dense terror is counteracted with spacier tracks like “Maiden Star.” Stone has fun with the jumps cares, but he also wants to rise above being “just” a metal band, or “just” a sci-band. There’s an intelligence wrapped in the machinery here. This is cyborg music driven by metal fingers, but the human heart is still intact.

Bug Heaven: We Love to Live in Hell