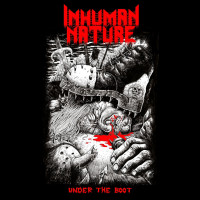 I remember seeing the artwork for Inhuman Nature’s 2019 self-titled debut album and immediately wanting to press play. I don’t know if the band would appreciate this description or not, but it’s kind of sixth-form Frazetta-worship crossed with He-Man. The record was 8 songs and 28 minutes of thrash/trad metal that did what I expected it to do. And I mean that as a compliment. But I also can’t say it made a lasting impression on me. I just earmarked them as a band to keep an eye on.

Seems I wasn’t the only one keeping an eye on them as they recently signed to Church Road Records and are dropping this EP on Feb 11th. To say there has been a step up would be an understatement. Whereas previously it felt like the band were doing all of their constituent jobs perfectly well and creating a pleasing metallic racket, there is now an entirely more fully formed sound on display and it’s delivered with a level of conviction which is fucking irresistible. I’m going to cut to the chase; this band have just leapt into the lead pack of potential successors to the (much vied-for) throne left in the wake of Riley Gale’s tragic passing. That particular scene has been alive with newcomers since Nightmare Logic, frankly, and with bands like Enforced, Ekulu, Dead Heat, Honey and more besides, rarely has the scene been in better health. Which is a fitting legacy for Riley, no doubt.

For clarity, there is more of a trebly Motörhead-esque punk rattle to Inhuman Nature than the slick, tight sound of Enforced. A less swinging and sun-soaked approach than Ekulu and an almost bleak metallic aggression that I don’t necessarily get from Dead Heat. None of this is better or worse per se, but the crunch, the groove, the measured pace interspersed with the 4/4 stomp…it just does ‘that thing’ to me that Power Trip did. Wild, unabashed metallic lead work and dive bombs, unhinged roared vocals and just pure urgency. Vital and visceral. And produced in such a way that you’re almost wiping the flecks of sweat and spittle from yourself as you imagine the band playing it right in front of you

I never want anyone to replace Power Trip, or to try, but I do want bands to make me feel like Power Trip made me feel. And this EP is as close as I’ve got in a while. I just hope the record, and the live show, when they come, can live up to the promise here. Because I have emotionally invested in this band already and I didn’t really have a choice.