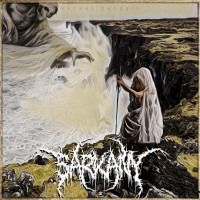 There’s no shortage of extreme metal bands knocking around these days. There are a bunch of reasons for this, but one of the bi-products is that from time to time you’ll happen across an artist/band who you know nothing about; but crucially, can also find very little about online, despite relatively extensive searching. Rarer still, is when you can’t even find much about their record label (when they have one). I should stress this is no sleight on any of the labels. I suspect they’re more active in parts of the world where I am not and, in many cases, will be doing it in a very DIY way, which is obviously to be applauded. So yeah. Sarkany are one of those bands for me.

Almost any reference to the band or the label I find online seem to actually refer to other acts/labels. So we’re back to basics here. I have no press notes, no skin in the game, no nothing. I just dig the fuck out of this record so I’m writing about it. Like I say, it’s death doom at its core. But not just that. It will swing, sometimes very unexpectedly, in both pace and vocal delivery to more of a black metal style. And when the piano arrives then we’re in full lachrymoase goth territory. Real Interview With The Vampire stuff and I’m fully into it. But when the band drops back in, the tempo and tone are smack bang in the death doom world again, no question. I suppose the reason that these transitions seem to work is down to three things. Firstly, the vocalist’s ability to move from drawn-out guttural death growls to shamanistic bellows the like of which you’d expect from Schammasch or Regarde Les Hommes Tombres. Secondly, the guitar tone. Far tighter and with more treble than you would associate with death doom, but when the need comes for real heft, it delivers that in spades, too. In those moments, it’s not HM2, but it feels like it has some in its bloodline. Finally, it’s simply the quality of songwriting.

It’s a pretty long album at 52 minutes over a mere 6 songs (one of which, “Wizardry Washed Lands” being almost 15 mins long), but a combination of the mood and ambience which runs through it and the complete lack of template when it comes to song structure means it just flies by. The acoustic and synth passages in “The Portal”, the analogue vinyl flickers that accompany the almost Mike Oldfield-aping interlude “Dungeon of Despondency”, the bright arpeggios of “Celestial Envy” that precede tremolo-picked leads, themselves preceding the tortured vocal that is never delivered with anything other than complete conviction. At times, that conviction turns it into a background falsetto screech of utter pain and despair. Musically, there are moments I think of Yob, moments I think of Uada, moments I think of Dream Unending. I just want other people to listen to this, really. If you like death doom, or if you like the more plaintive, gothic and left-of-centre black metal, then I think you owe it to yourself to listen to this. Oh, also, Sarkany is a kind of dragon from Hungarian folklore. So their name is cool, too.

Inhuman Nature: Under The Boot (EP)