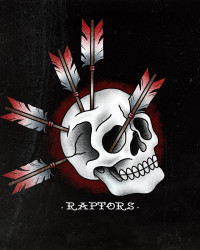 It only takes a few seconds to realize that you’re in for a party when you turn on the new Raptors self-titled EP/mini album. With upbeat twangy guitar riffs, infectious melodies, and smashing drum beats, the southern California based five piece band certainly isn’t lacking in enthusiasm, energy, or potential. Melodic punk rock is having a big moment right now, and this self-titled release is holding its own with the potential to be at the front of the wave in a very short period of time.

Despite not not releasing an album since 2012, Orange County based Raptors (who were formerly known as the band Death Punch) have made up for lost time - their most recent offering dropped in late 2021 shows a coming of age sort of maturity: melodic pop punk peppered with nostalgic post hardcore breakdowns plus lyrics with poetic storytelling capabilities that could easily cross over into hardcore, rocksteady, pop, etc. In fact, it can be said that the hallmark of a strong songwriter is one who can produce songs that are flexible and structured well enough to work in many different genres. Each individually unique, all eight of the tracks both stand alone and deliver in their own ways.

Lead singer Ike De la Torre gives off vibes similar to The Bronx with a rousing, raspy, enthusiastic singing style that leaves abundant inflections of character and personality throughout the entire release - the sort of singer who could also do a country project, a soul project, or any other genre his flexible and broad range could easily adapt to.

Raptors starts out strong and hard with “Lost That Life”, a bouncy pogo type fist pumper of an opening track that introduces you to the catchy harmonized vocals and crashing percussion section consistent throughout the entire EP. It’s also a great introduction to the take no prisoners personality of the band themselves, and as you shift into the second song “JCA” (Jurassic California) which lyrically seems to reflect a tale of the past ten years of the various band members lives, perhaps where the previous album left off. This track is also the introduction to the complex dual styles Ike and Casey showcase throughout the rest of the EP which reflects a highly edited sense of restraint in terms of just enough alternating vocals, harmonizing, additional background contributions, etc. Every great SoCal band needs a song that’s essentially a narrative of the experience of living in Los Angeles, and this is the track that delivers.

Other stand out tracks include “Clever Girl”, where Marc’s glam rocky guitar riffs shine as Casey leads the way with smashing drums that precede fist in the air style choruses. Singalong tune “Good Guys” brings on a sort of full body engulfability similar to how The Menzingers inspire their audiences to get up and dance. It’s also noticeable how Matt Freeman is most likely a huge influence to Damien who holds his own on the EP with complex, springy bass lines confidently laced throughout each song.

Raptors definitely succeed in delivering a polished, well produced, eight song mini-album offering which could perhaps have been well served by arranging the songs in a different order to create a more impactful delivery. That being said, Raptors is a perfect example of quality over quantity as a certain level of mastery to all aspects of it is quite apparent: lyrically, musically, melodically, and production wise - leaving you wanting and waiting for more new music and big stage appearances from this karate chop of an act who is currently unsigned.

Dissidente: The War on Two Fronts

The Hellacopters: Reap A Hurricane [7-inch]