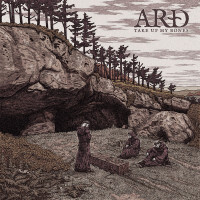 It might say something about my recent mental state that I’ve listened to a lot of doom recently. Might just be the time of the year. It’s cold and grey here in the UK, so it works kind of well. Depending on how you look at it. So when a one-man doom project album that is built conceptually around the relics of Northumbrian saint Cuthbert (7th century) dropped into my Inbox, I was maybe more open to the idea than I might have been had I, for example, received it in July, in the midst of a Less Than Jake binge. (Yes, it does happen before you take to the comments section.)

The single architect of this record is Mark Deeks PhD. A Doctor of Philosophy, having earned that title through his thesis on “National Identity in Northern and Eastern European Heavy Metal”. So predictably this is no ham-fisted approach to the subject matter. (To be fair, it would be an oddly specific subject to land on if you weren’t familiar with it.) The tone of the record is that of the early post-Roman world. Specifically, Britain. Even more specifically, Northumbria. The pace is glacial. The chord progressions melancholic, the instrumentation often traditional. Piano and monastic chanting feature heavily, but then so do almost excruciatingly well-crafted electric guitar passages. I refuse to use the word ‘solo’ in this context as it feels entirely inappropriate. But the electric guitar lead work in “Raise Then The Incorrupt Body” is nothing short of breathtaking. It largely follows the line of the piano, but the resulting combination, along with the strings and choral vocals is as hair-raising a moment as you’re likely to have in 2022. If you’re into this stuff.

“Boughs Of Trees” is nearly 6 minutes of piano, cello, violin and other pieces of instrumentation that you may not have initially felt you needed, but I for one am utterly delighted that I have them. When the drums arrive at around 3 and a half minutes in, it turns the song from a gentle lament into something far more acutely affecting and barbed. Immediately after you’re treated to a stark, if more conventional vocal in the opening stages of “Banner of the Saint”, but it’s not long before the musical arrangement in its full hoves into view and you’re swept up in the colossal majesty of it. But it’s not triumphant. I need to make that as clear as I can. This isn’t atmospheric black metal, it’s a million miles away from power metal with a medieval theme. This is music that evokes the dirt under the fingernails of kings. The weight of, and the comfort brought by, all-consuming monotheism for people in a time of genuine darkness and routine violence. The majesty that comes from this record comes from those places. They may not always be pleasant places, but they are places that are powerful and important.

It would be all too easy to indulge in this sound and make it 80-odd minutes long. But despite being patient, extraordinarily filmic and taking as long as it needs at all points, the record sits at less than 45 minutes total. I do have a slight concern with some of the narrative that surrounds Winterfylleth, Deeks’ other, more well-known musical outlet, but in the interest of objectivity I am looking entirely at this record and can see no immediately obvious red flags in terms of content. All I can bring myself to hear is an expertly realised concept album/mood piece centred around a very specific and evocative period of history. If the intention was to recreate that darkness, that oppressive malevolent weight, then this record succeeds in doing so. Magnificently.

The Hellacopters: Reap A Hurricane [7-inch]