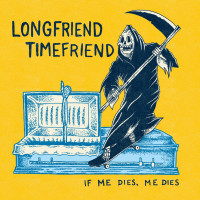 It’s been about a year since the release of If Me Dies, Me Dies and I’m pleased to say this album still holds up. Though a bunch of tunes were released as singles, in the context of the full record they take on a good supporting role in establishing what the tone of this record is, as well as what the identity of Longfriend Timefriend as a group. This album has a very straightforward style, but at the same time has a few tunes that throw in some variety and showcase some different influences.

First off, I love records that have an introduction song…so major brownie points for that. The first 5 tracks are a must-listen for any fans of Jason White projects and have elements of the Menzingers or Husker Du. Once we get halfway through the title track, we start to veer into some Joyce Maynor territory, where the pace is abandoned in favor of more descriptive/apathetic lyrics and songs that aim to tell their own story. Personally, this is where the record loses me a little bit as someone that favors the thrash. Also, I would’ve really loved it if the ripper tune came a little sooner than 11 songs in, but it did favor a strong ending to the album as a whole.

Hard for me to pick a favorite, but Chalk Outlines comes in and shocks me with a sound I haven’t quite heard since the days of 44 and vintage Alkaline Trio. Then, the sound is switched right up to a Nirvana lover’s Pardoned, Forgot About, and ultimately, what to me would be the climax of the record, Fix Your Shit–(which to me could've had a Brain Stew/Jaded tie together for a real chef’s kiss). Even so, that trinity of radically different tunes is very telling that LFTF is capable of going any way they want and I’m here for it.

Even though nowadays I personally find myself listening to albums as I accomplish things on the to-do list, this record made me want to dust off the skateboard, forget any responsibilities I have, and just ride around like a kid again. I could also see myself holding this record in my hands, reading along, and really trying to experience what the artist was going through. This album has motion, went to different places, and is a very good example of why a full-length album is still relevant to the arts today.

The Devils: Beast Must Regret Nothing