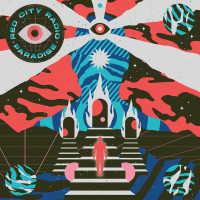 I like Red City Radio, there I said. Is that a controversial opinion? It doesn't feel like it should be, they have been generally well received here for years. So that begs the question, why wasn't "Paradise" reviewed back when it was released in December 2020?

In terms of movies, TV shows, games, etc. ... If something isn't reviewed when it is first released (or in this case, reviewed at all) it usually means something is so average or so unremarkable that no critic wants to bother with a full review. Which I just don't get since Paradise is a very good album.

We open with what I would say is the worst track, the mournful "Where Does the Time Go?", which is just Garrett repeating the title over and over again, and I don't feel it fits with the rest of the album at all. From this point on, there really aren't any total duds. "Baby of the Year" is the next track, while it's definitely fun, it's more noteworthy simply because of the bizarre music video (did you know those were still being made?) staring male porn star Small Hands. Which is a connection that I don't understand, but who cares, it is still a good song with a funny video.

The rest of the album is, at very least good, and some songs are downright great. The highlight I feel is "Apocalypse, Please!", a song that is a total blast from the start and is honestly one of my favorite RCR songs ever. Right up there with "Two out of Three Ain't Rad", or even Garrett's solo song "2016 Was..."

All in all, I was very appreciative of this album. It made me happy when the world was somehow even more jacked up than it is right now. I can (and have) listened to it on repeat many times since its release.

13 Bats: Once a Punk Always a Punk