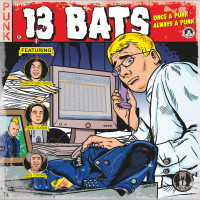 Once a Punk Always a Punk is the fifth studio album by the Spanish band from Madrid 13 Bats and the first with the new line-up, released in November last year. Dani Bats, vocals and double bass, now remains the only original member of this punk, psychobilly power trio since their formation in 2006. Like all their previous records, this one is also released on Potencial Hardcore, the king label of independent hardcore punk in Spain.

Once a Punk comes straight out of the pandemic and it’s a wonderful excuse to put the newcomers to the test. Fifteen songs blending hardcore punk and rock and roll in English and Spanish alike. One positive aspect of staying underground is that one can keep a certain degree of purity that goes especially well with a not-give-a-damn attitude and 13 Bats appear to be on that path. If after all these years, gigs and albums the Spanish combo still had something to prove, here they make clear they don’t worry too much about it. Despite the new members -and these uncertain times- they sound as a unit and free, and that’s the way with changes, you move with them and join the dance. If sometimes a bit rushed in their choice of songs,.

This fifth release opens with “El Enchufe del Rock ‘n’ Roll” (The Connections of Rock ‘n’Roll), condemning some festivals for monopolizing the scene always scheduling the same bands and not giving opportunities to others; then the funny melodramatic but resilient “Hypochondriac” and the title track about self denial take no prisoners, solid and down to work. 13 Bats might have picked right up where Nekromantix, Mad Sin or Tiger Army left off but the Dead Kennedys had been there before. They actually never hid their open admiration for the Dead Kennedys as a whole, music and words although this can show them up a little sometimes like in “The Smile of the Clown'' constantly playing the same surf-psychobilly riff. 13 Bats feel loved in Brazil, they’ve been there a couple of times for the Psycho Carnival. This love they give back with two covers of Brazilian bands, “Hombre Primate'', which they turn into a Ramonesque/Rancid number against the destructive progress of capitalism and also “Paciencia”. The latter is more original and fits better into their palette; it helps that it wasn’t released before. “Lucille” is a classic mid-tempo rock and roll a la Jay Hawkins about some evil woman. Sibe B, (yes, I do have the vinyl) starts or continues with the same pace with the western “The Spanish Billy The Kid” denouncing some scumbag fascist. Then comes another cover, Accept’s Fast as a Shark, fun but the youtube music video adds more sense to the song. So now it’s about time for a hit; “Fucking Hippie” stands out above the others, melodic punk rock with great almost profound lyrics. They also revisit “Goodfellas” from their debut album with some more production and a new intro. They invite Rude Pride to sing along to “We look like Zombies”, an Oi! street punk attempt that came out a bit messy but the message is there. “Esnifa tú un poco por mí” (Sniff some for me) a cool, playful homage to a jug band. Kaos Urbano collaborates on “Dentro de un Espacio”, a furious punk tune. A political vision from the outside, dealing with nations fighting against each other; a delicate topic also in Spain, but there are no delicate topics for punks, they just raise their voice, so that’s what they do. One of the best songs in the album. With “Thug Life”, we come full circle, a vindication of punk as a lifestyle as if you had any doubts at this point.

13 Bats can get very musical and they do not hesitate if they have to. Yes, I think some songs give the feeling of losing concept but they still sound honest and even big sometimes, which makes them trustworthy. There’s less rockabilly here pointing more towards American Hardcore and that’s another good reason to be excited about seeing them live or hearing new songs, particularly once the new members get more worked into the 13 Bats fabric.