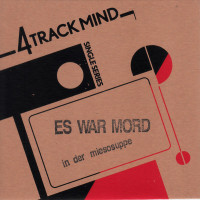 I’ve been screaming for albums like this lately, namely EPs, four-six songs, ten-fifteen minutes of music, barely any production and no edition - it seems they just pressed record and let it roll. That’s it! I’m not pretending to scribe the rules, for the umpteenth time, of how punk and hardcore should sound but I do think, at least everything that revolves around punk should be recorded live. Or paraphrasing the enormous Ratos de Porão, “Cada Cada Dia Mais Sujo e Agressivo”, that 's how I like punk. That Bad Religion “Suffer” was a game changer doesn’t necessarily mean it changed the game for good. Yes, changes are inevitable, but growth is optional. Well, in any case, another advantage of this briefness, frankness, is that when it finishes and leaves you wanting more, you can play it again and you’re good to go.

Formed around Tom Schwoll and Joseph Ehrensberger, two ex-Jingo de Lunch, with singer Stunk from the Situations plus the recent inclusion of Turbostaat's bassist on bass duties are good credentials and it's working well for them. They set the bar high and help keep the scene exciting, even in a city like Berlin with thousands of bands. But they have this uniqueness and the character of the old school 80s bands, who had to be different accepted, and not the other way. Just the fact that they sing in German is a decision. It makes them sound more organic by digging deeper, and easier, in their emotions. With it the audience can also feel closer, too. But don’t worry, even if you can’t speak Goethe’s language the music will go through your body like a spear -after all, it’s a universal language.

Speaking about the music and lack of originality, they approach that topic with sarcasm and high energy rock and roll in “Papas Punk”, a riff reminiscent of The Damned. There’s more Scandinavian Rock in “Hitze”. “Die Differenz'' sounds like a troop taking over the whole street, picking up everything on the way and leaving only a cloud of dust behind them while on a crusade demanding more humanity. And the starter “Dunkle Töne”, that goes too well, unfortunately, with today’s tragic news of a war in Ukraine, tones in dark/lights out… the old story/starting all over again.

ES WAR MORD is Düster Punk that in English translates as Death Punk. Dense, urgent and out of the box like it was in the 80s before the game changed. They sound decadent like Turbonegro, insatiable like Poison Idea and they rock fast like The Hellacopters - Scandinavia being not so far away; yet, Berlin is cold and gray enough.