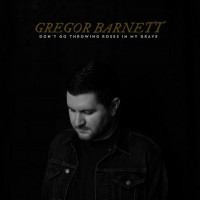 The list of punk bands with lead singers who released a solo album is relatively long. The number of those singers who never returned to their band is also, sadly long. I don’t understand why front-man syndrome is so rampant in this genre, there can’t be that much more money in being solo, can there? Are they saying that the music they really want to make isn’t what their band is making? I don’t have the answer to these questions, but I do know that when Greg (Gregor, really?) Barnett announced a solo album, I was crushed. I have loved The Menzingers for years, I was introduced to them when they opened for The Gaslight Anthem, so you can probably see where I thought this was headed.

I wanted to hate-review this album, give it no chance, and apply the extremely rare rating of less than 3 stars. Alas, I cannot. “Don’t Go Throwing Roses In My Grave”, while not perfect, is good, at times it is great even. Quite frankly, this is one of those examples where the music truly isn’t what the current band is recording, and as such could only be done solo.

I won’t go track-by-track, in my opinion it should be taken as a whole. That being said, the album has a number of great songs. My favorite being “No Peace of Mind to Rest”. Not to get too personal here, but this one has replaced Greg Graffin’s solo version of “Cease” as the song I want played at my funeral. Granted I hope that is some 40 years from now, so things could change. Still, it is a great song that honestly gives me chills.

All-in-all, I really enjoyed this album. I favorited half the songs on Spotify, which is pretty rare, I usually only find 3 or so per album that I want coming up on shuffle as I drive. Hopefully everyone can put aside any preconceived notions and give this a chance.

Sweat: Gotta Give It Up