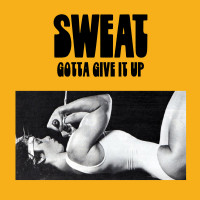 Since the beginning of the covid pandemic, especially during the earliest days of no shows at all, but continuing into the even longer (currently ongoing) period of shows in constant danger of getting postponed or canceled, it’s brought me a sort of bittersweet feeling to hear a good new song. What used to be “this would be so awesome live” became “this would be so awesome live, wonder if that’ll ever happen.” It’s a bummer to think about it in those terms, but I mean it as a huge compliment to any songs I’d say it about. “Big Time Flex” from Los Angeles hardcore band Sweat’s 2020 7” on Vitriol Records is one of those songs.

The double-edged sword of having a song that good on your first EP is that it sets a really high bar when you decide to put out an LP. Hell, even when a band doesn’t nail it as hard as Sweat did on their first release, expanding on hardcore punk without diluting it can sometimes be a tough line to walk. Sweat absolutely pulls it off on their Gotta Give It Up album.

Early hype for this record mentioned influences including Wipers, Cro-Mags, Masshysteri, Rival Mob, Motörhead, and Thin Lizzy, and there are times I can hear all of them. My current favorite songs (“Machismo”, “Bone to Pick”, “Poor Execution”) all have some 70s rock-sounding guitar parts, stuff I’d play if I was trying to get my dad into hardcore. There are even a couple moments (“Bastard”, “New Kind of Dag”) that call to mind NWOBHM, and suggest taking a break from circle pits and stagedives to I don’t know, sword fight or storm a castle on horseback or something. Jokes aside, Sweat deploys their influences tastefully, and the album maintains a focus on hardcore punk that keeps the music from feeling contrived or silly.

All of that would provide plenty to like on its own, but Gotta Give It Up delivers even more when you pull out the lyric sheet. To bring this back around to the themes of bittersweetness and doubled-edged swords, for every breakdown or shout-along part, there’s a lyrical gut punch that will likely connect with anyone listening to a punk record in 2022. While the songs tend towards the first person, they never feel so personal as to become exclusionary, but also avoid falling into vapid hardcore sloganeering. The band may be smiling in the Polaroid-style liner notes photos, but there’s a well-thought-out undercurrent of anger and sadness running through these songs that elevates Gotta Give It Up beyond being simply a fun hardcore album.