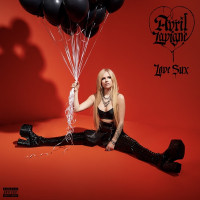 Has it really taken seven albums and twenty years for Avril Lavigne to find her sound? Not to discredit any prior achievements, of course, but gaining such popularity with a debut album only adds further scrutiny to any later work, especially when done so while still in your teens. Love Sux is the most solidified album of her career. Even though we are currently going through a nostalgia phase for early aughts (still looks weird typed out, let alone saying aloud) pop-punk, she easily rises to the top of this new wave with her vocal and song writing abilities. This album will be on top ten pop-punk revival lists, for better or worse.

Maybe not so much known on this site, but Travis Barker has ushered in the renewed interest for the genre with his multiple collaborations and producing credits with the likes of Machine Gun Kelly, Iann Dior, Willow Smith, YUNGBLUD, Trippie Redd, and a revamped Blink-182, obviously. Signing Avril Lavigne to his label and running her through the machine was probably the most credible move for the movement, even though this style of the genre will always be slightly juvenile and cringey. John Feldman and Mod Sun also round out the production team of this incestuous braintrust, so you already know what this album sounds like: slick and polished, two-to-three-minute songs about some vague relationship troubles and/or the disappointment that is life. Nothing too deep or offensive, honestly.

A track by track analysis really is not needed, but there are plenty of hilarious and genuinely cool moments to touch on. “Cannonball” is a great intro to the album, even if Avril’s declaration of “Motherfuckers, let’s go!” is hollow sounding. Basically, anytime she curses or has a call to action, it sounds forced. Musically, the track goes into slight electro-punk territory for the verses with heavy synths and drums, which is a nice touch. Standard pop-punk chorus, but with the added benefit of her being an extremely talented vocalist. This style just lets that shine through and allows her to play around.

“Bois Lie” is an obvious crowd pleaser, with the genre prodigy himself gracing the album. Unfortunately, when Machine Gun Kelly comes braying in with his lines, it is just a cut and paste repeat of “Forget Me Too” from his album, which featured Halsey, but not as urgent sounding. The guy knows what works for him and is working it hard, but it feels like the pop-punk version of Chubby Checker, who not only has “The Twist”, “Let’s Twist Again”, and “Twistin’ USA”, but probably has later songs called “I’m Twistin’ Over Here”, “Stop, Drop, And Twist”, and “T.W.I.S.T (feat. Korn)” (not to be confused with the track “Twist” by Korn). Much respect to Chubby; it was a lot harder to get songs on the charts back then, so if you had a schtick, it was better to ride that train.

Most of the tracks follow the same course: tight song structure with a catchy, if forgettable, chorus, then end within two and a half minutes. The title track nudges out this notion by being more than memorable with the sing along chorus. “Avalanche” and “Dare To Love Me” are the ballads of the album and add a little breathing room to the quick takes of the other tracks. Another highlight is “All I Wanted”, which features Mark Hoppus. Listening to them trade verses is legitimately fun and a testament to why they are both still on the Billboard charts today. A couple of flubs are rapper blackbear’s flat verse on “Love It When You Hate Me”, the rhyming of “asshole” with “castle” on the track “Déjà vu”, and royalty free snippets of Blink-182 riffs sprinkled here and there, but definitely on “Kiss Me Like The World Is Ending”.

If you are currently living for this nostalgia boom of your middle and high school years, then Love Sux will definitely sate your palette. Avril Lavigne brings a legitimacy and boost to all this by being such a heavyweight from the actual time period that is being aped, but overall, there is only so much that can be done within the genre that has not been expanded on already. Newer acts such as Stand Atlantic, Meet Me @ The Altar, Hot Milk, and so many others have done much more without the cut and paste pop-punk template that is prevalent right now, but it is nice to see Avril get another moment in the sun. This album will be forgotten by most that bother to give it a listen, but it hits enough high marks to be carried by fans of this revival. It is basically a time capsule of a time capsule, nothing game changing, but good for what it is harkening back to.

Downcast: I Saw Hell When I Was With You