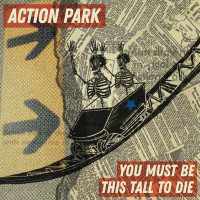 If you wanted to be someone that was there for the Descendants in the very beginning, Action Park is now giving you that chance. It’s all there with this record–punchy riffs, crisp drumming, dueling vocal styles, quick bass licks, and most importantly…some spot-on harmonies! For a debut record, what could be more promising?

Though on the surface this record may look and sound like a straightforward punk album, if you take the time to follow along with the lyrics you’ll notice a lot of introspection and emotional management. Thematically, much of the songs deal with difficulty coping with how life is passing by on a daily basis as well as a struggle to accept troubling memories. Lots of apathy, negativity, and just overall dissatisfaction with the world and the feelings that are raging inside.

The first 5 tracks are definitely like different parts to the same rollercoaster, hitting verses and choruses hard, peppering in some instrumental breaks, and very up-and-down pacing between tracks. The opening track Wrong just absolutely slaps in every way possible, however the following track really drops the pace for me and I think having Boston as the second track would have a more solid beginning to the record. Side By Side is another tune that I think should be in the first 3 tracks rather than going back and forward with the more mild-mannered tunes.

Halfway through the album, Call Waiting hits with an intro composed of nifty basswork resembling a Strokes song, but then kicks back into Egerton-style guitar licks. With lengthy instrumental breaks, even a Pink Floyd kind of bridge, this tune throws away what you thought the rest of the record was going to sound like and forces you to pay attention all over again. Kicking off the second half of the record, 24 Months comes in with what might be my favorite guitar/bass melody line as well as one of the strongest choral lines on the album.

Then the start-stop pace continues on the B-side with a couple of laxed tunes and a couple of rippers–bringing us to my personal favorite: Airwaves. If this tune doesn’t grab you and at least force you to nod your head from start to finish, you might have to reevaluate where you are in the punk spectrum. I really thought the bass dropout after this guitar solo was going to lead to some H2O half-time breakdown…but alas, this isn’t pop-punk..and instead we actually even get some “Hey’s” while the thrash finishes strong.

Probably the only thing that's missing for me with this record is that little piece of magic that causes songs to get stuck in your head. Beyond the opening track (that to me had it all) I just really wanted at least one more banger to catch me off guard and have me singing the melody when I’m in the shower. I don’t quite know how to quantify that, but I think it’s something that is subjective and likely to hit others as listeners totally differently. I think a more crisp vocal tone would also definitely help because…

Lyrically this album is incredible. That is probably my favorite element to this record as well as having multiple different singers. I feel like I’m really stepping inside different people’s brains reading these lyrics and really connecting them to times I struggled with how I thought my life was going. It’s poetic, real, and raw.

I think this band is on the verge of something great.

Downcast: I Saw Hell When I Was With You

Escape from the Zoo: Countin' Cards