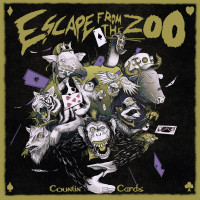 Escape from the Zoo

Escape from the Zoo, I’m told, is made from some of the pieces and parts of folk punk act Dayz N’ Daze. Full Disclosure: I’ve never listened to any Dayz N’ Daze music, so the existential question of “How does this compare to previous efforts from the band?” won’t really come into play (for better or worse). So let’s begin with a quick hypothetical conversation:

How does the album sound?

A bit crunchy, a bit punk, a bit ska, and a tiny-bit folky, with really solid melodies.

That doesn’t really tell me much of anything.

Correct, but I feel like it’s pretty fair due to the fact that styles seem to change from song to song.

So is it good?

Well, now we’re going to get into the meat of this exercise. I mean absolutely no disrespect when I say that there are two bands on this album. Which band you prefer depends on your own personal tastes. Take the first track “Heads Up 7 Up”, it’s a fairly straight-forward ska/punk screamer. Lyrically it attacks the idea of the American dream, and questions what success really means.

So you work ‘til you die, the American dream is a sham. Just saving up paper to stuff in an urn. Dead-eyed we go through the motions. I ask is your time truly worth what you earn
- Heads Up 7 Up

From here you’ll immediately move to what I would consider one of the standout tracks on the album: “Shit Show”. Leaning more into the ska side of things with this one they leave the screaming behind and lean into melody while singing about reflecting on your life and coming to terms with past actions while keeping yourself moving forward.


I don’t wanna wait ‘til the end of time. Soon we’re all just gonna die. All I’ve got to show is this unfinished list, all my regrets I’ll never cross off.
- Shit Show


These two songs are the two equal halves of the album, and each song swings between hyper-melodic ska punk, and fast screaming punk. The folk side of Escape from the Zoo peppers every song to varying degrees of success and notice. Countin’ Cards is at its strongest when leaning heavily on melody and dueling voices producing infinitely catchy choruses about making mistakes and getting old.


Ignore the voices, you're fuckin' worth it. Failure's how you grow and unbecome a shitty person
- Learnin’ Curve

Action Park: You Must Be This Tall To Die

Bitter Branches: Your Neighbors Are Failures