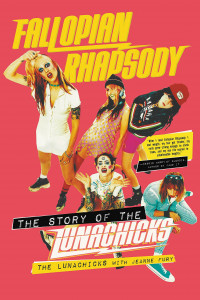 Fallopian Rhapsody - The Story of the Lunachicks 📕 (2021)

There were a few good years, we’ll say 1996-2001, where I was in the target audience for the Warped Tour, and I’d be legitimately excited to watch a decent number of bands and hang out all day before early 20s jadedness set in and my mood turned more into “back in my day you could pay for this thing with a 20 and get back a nickel,” and “am I too old to be here?” Of those years, 1999 stands out as the one I have the fewest specific great memories of, but the one thing I do remember that year is the Lunachicks blowing everyone else away. It wasn’t that I didn’t like some other bands that were playing, but in terms of expectations versus reality, Lunachicks stole the show.

A few years after that, I was talking to a friend I met sometime after Warped 1999, and the conversation turned to the Lunachicks. She remarked that she hadn’t met many guys who were into them. It struck me as surprising at the time, as they seemed like an accessible enough band musically (at least in terms of punk), and they had been on some high profile tours throughout the 90s. That conversation could have served as a warning shot for one of the themes running through their book that would come out a decade and a half later.

The fact that rock music, even within punk, can be a sexist boys’ club really shouldn’t come as a surprise to me, but I still found myself shaking my head in disbelief at some of the obstacles the Lunachicks detailed in Fallopian Rhapsody. From being seen as a novelty act (albeit to their advantage early on), to having ridiculous tour routing because certain venues had met their quota of “girl bands” for a given month, to having trouble finding a label to release their records even with two full lengths under their belts. That’s not even getting into the insane story about a two-way mirror in a dressing room that opens the book.

Rhapsody isn’t all downers though. Several tour stories had me laughing out loud, but I won’t spoil them here. Also, the Lunachicks had an almost Forrest Gump-like proximity to all manner of cool 90s bands and events. The book touches on a range of topics including recording with Kim Gordon and Thurston Moore of Sonic Youth, playing with Nirvana at Reading in 1992, the NYC club/drag scene, and tours with everyone from the Offspring to the Go-Go’s to Marilyn Manson.

Despite the fact that it feels like the Lunachicks never reached the levels of fame they probably deserved, the book reads like a triumphant story. The core of the band, singer Theo Kogan, guitarist Gina Volpe, and bassist Sydney “Squid” Silver have been friends since their school days, and they’re each present for an oral history-style recounting of all the ups and downs detailed here. There’s also a good amount of input from past members Sindi Benezra and Becky Wreck, and longtime drummer Chip English. Tied together nicely by writer Jeanne Fury, the book takes us right up to the announcement of their 2020 reunion shows (which became 2021 reunion shows due to covid.)

In 2021, the Lunachicks played the main stage at Punk Rock Bowling in Las Vegas, and despite playing between the Murder City Devils (one of my favorite bands) and Devo (who should be one of everyone’s favorite bands), they still managed to have maybe my favorite set of the weekend. If this book release served as the impetus for them to get back together to do that, that’s justification enough for me to love it, but there is a lot to like here for anyone interested in a rock n’ roll story of a girl gang of freaks from NYC made good on their own terms.