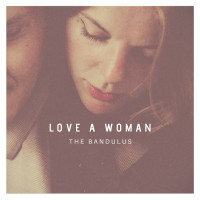 If it sounds like I’m describing an entire festival’s worth of talent, Portland’s The Bandulus are not only one of the most versatile but also one of the most underrated rocksteady/soul bands out there today. Hitting every note of hooligan subculture with their high energy blend of what they call a “smorgasbord” of Jamaican throwback tunes mixed in with crooning slow dance belters plus hand clapping Northern Soul movers, their under the radar 2020 release Love A Woman is the sort of album that begets staple status almost instantaneously to any devotee of mid century music.

Love A Woman immediately makes you want to move with it’s first two tracks, both an uptempo soul and skinhead reggae song respectively, featuring some of the most impressive organ playing on the entire LP by the “Boss” keyboardist of the moment, Esteban Flores of Catbite, Mamatoska, Mr. Kingpin, We Are the Union and many, many more. (The Bandulus also features core member Anthony “Fat Tony” Cotham, who alternates duties with Flores) Shifting from a Little Richard style rock n’ roll piano on “Stop Playing With My Heart” to the distinctive boop boop BAP skinhead reggae beat in “Break The Ice” - by the time you reach track number three, their nod to traditional ska with the pleading lyrics of “Dear Lord”, you realize multifacetedness of The Bandulus as they undulate from rocksteady to motown to R&B then back again.

This is… one of those albums. Cleaning the house or making pancakes on a Saturday? Put it on and turn it up. New partner’s parents coming over and want to play something everyone will like? This is the one. Is your boss in the car and you want to create easy small talk? Ding ding! Having friends over to pre game and don’t want anyone to fight over the playlist? The answer always circles back to Love A Woman, The Bandulu’s third studio length album well known in hardcore ska/reggae and soul circles, but still fairly relatively unknown to the greater punk community at large.

Great for fans of The Slackers, The Pietasters, Deals Gone Bad, Amy Winehouse, and The Inciters, The Bandulus is a 7 piece act whom I stumbled upon watching a livestream concert during the thick of the pandemic. Set up in a backyard, the no frills set knocked my socks off as the combo of lead vocalist Jeremy Pena and powerhouse dual background singers Leah Farmer and Emma Bitter blew me away with their throwback set of Trojan Records era inspired rocksteady/ska mixed up with high energy 50’s-60’s style soul and slow dance inspiring ballads crooned by Pena.

Other standout tracks include the groovy, Western Reggae tinged “Mr. Bad Luck” where the influence of iconic guitar player Agent Jayson Nugent of The Slackers is prevalent, the Northern Soul clapper/dance floor packer “Stay True”, and a personal favorite, “Truth” which I’d love to see Pena and Flores duet onstage with Jesse Wagner and Roger Rivas of Aggrolites fame because of how similar it is to their signature “Dirty Reggae” sound. Bluebeat icon Chris Murray also joins in on a track to collaborate for the mellow tune “Two Times” - helping to make Love A Woman as well rounded of an album as it is flexible musically. The level of both mastery and restraint involved in harnessing and perfecting each genre of sound as opposed to a mish-mash of them all combined together is both commendable and a testament to the astonishing amount of talent this group originally hailing from Texas has.

Speaking of Agent Jay, I once again stumbled upon them while on tour with The Slackers in Seattle last year, hooking me on the album that packed the dance floor for their entire set - one that was already thumping through my earbuds as I blearily rolled my luggage through Sea-Tac at 6AM the next morning. With just enough uptempo songs to keep me awake, and an equal amount of moody slow songs to keep me vibing after a 4:30AM post - gig/tour wakeup, Love A Woman has stayed with me, in my playlists, and stuck in my head ever since then.

Seeing them live in this case however, has its own set of pros and cons. After initially giving the album a few loops in the weeks after the show, I instinctively felt like there was something missing despite the caliber of the overall release. Then after seeing footage of the show afterwards, I realized that I wanted to hear more of the other two vocalists on the album. Like, way more. The only major drawback of the 2020 release is the fact that neither Farmer nor Bitter get to shine with their own songs, which is mildly tragic. At the Seattle gig each belted out their own soul songs respectively to a massive crowd reaction, and I inculcate that a 14 track album that includes both a regular and Dub version of one track, “Another Lie”, plus “Smile”, a “Discomix” with the help of Agent Jay, (speaking of, again) would have fared more than nicely with the addition of their unique and powerful voices individually or even dually spotlighted in at least one song.

In my own personal Rudegirl dream world, The Bandulus would be the ultimate “Prom Band”, combining all the traditional ska, rocksteady, heavy reggae, girl groups, and northern soul I’ve traveled many a mile over the past 25 years to see, but usually in just one individual band. I cannot stress how unique and important it is that groups like this exist - who pay homage to the roots of the music so beautifully and joyfully while maintaining their own idiosyncratic sound and identity. With ongoing themes of falling in love at gigs, staying true to what you believe in, the pure heart but empty pockets of a career musician, and other ballads of the working man type lyrics i.e. meeting the girl of your dreams… then wondering if you can afford her; but being the best man you can be to keep her, The Bandulus tug at your soft spots by the hearts they lyrically wear on their sleeves which is obvious in a commiserable way if you've ever been broken hearted, or just broke for that matter.

Play this album at work. Play it for your grandma. Play it for your kids. Play it at your BBQ. Hell, play it at your wedding. The important thing is it gets heard because it’s kind of for everyone and nowadays, that’s very rare. If anything, The Bandulus bring people together and that sort of intangibility is a priceless sort of commodity to have as an artist, musician or not. Love A Woman is a classic album the way that Back To Black, The Question, and The Ramblers are, and a must have for any fan of anything ska, reggae, rocksteady, and soul. And and the end of the day, as the popular Northern Soul motto reassures: The Bandulus quite literally “Keep The Faith”.