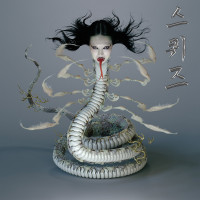 I think it’s possible to take from the aesthetic of a genre. Rock ‘n’ roll, in all its forms, looks and sounds cool. There’s no denying that. Even if it is a critically panned form. Squeeze is one of those rock albums that immediately sparks in your eye. Sasami, a former member of modern day riot grrrl act Cherry Glazer, finds her head affixed to a snake’s body looking like a vaguely futuristic Cannibal Corpse aesthetic on the album’s cover. There's an attitude to it that jumps off the gatefold. It looks fucking cool and it’s what captured my attention when scrolling past its cover in some pre-release write up.

Sasami has pointed to taking influence from nu-metal for her second offering on hipster label Domino Recording Company. She uses the space on this album to maximal effect. Technically, only a few songs could be vaguely described as nu-metal. The bass that grooves on “Need It To Work” or the guitar tone on “Say It” or double bass drum rolls on “Sorry Entertainer” definitely drip with nu-metal aesthetics. But Sasami’s is using the aesthetics of it more so than the sound by packing it into layers that fall over her core sound.

Squeeze opens with “Skin A Rat.” A perfect introduction to the alternative rock influences. Sasami utilizes a charging guitar line and call and response lyrics to great effect. At its core, the album still has some of the chamber pop elements of her previous work. “The Greatest” as an airy pop song layered with atmospherics of distortion that push it into rock territory. “Tried To Understand” wouldn’t sound out of place in the late 90s on a Lilith Fair stage. But throughout Squeeze, Sasami is maximal in the way she utilizes what previously would’ve been quiet moments. This is where the album delivers.

Upon first listen, Squeeze may seem a bit too disjointed. It can be whiplashing inducing to go from the Lilly Allen styled pop of “Make It Right” to the Kittie alt-metal of “Sorry Entertainer” until you realize that’s the point. Squeeze is similar to nu-metal in that way; why the fuck would we not have the audacity to mash things together that generally have no business being mashed together. The difference though is Sasami uses that dynamic for a more layered approach to the album’s influences. It tempers some of the dumb shit that tended to go on in nu-metal while not abandoning it’s ‘fuck it, we have nothing to lose’ approach.

However you want to label Squeeze though, it’s cool. It’s got an aesthetic, an ability to grab you, and I bet it doesn’t give a fuck what you think about it.

A Place to Bury Strangers: See Through You