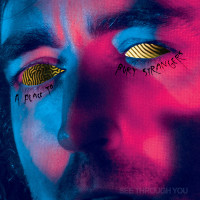 A Place to Bury Strangers

I first heard NYC’s A Place to Bury Strangers around the time of their second full length release, 2009’s Exploding Head. That album was an instant classic for me, with its My Bloody Valentine noisiness, Jesus and Mary Chain cooler-than-the-room vocals, and occasional melodies resembling early Cure. Despite the rotating cast of members Oliver Ackermann (who has been a constant since 2003) has collaborated with over the years and albums since then, those are still the reference points I’d use to describe the band.

For whatever reason, although I’ve seen them live a couple times and kept up with their later releases, none of them stuck with me quite like my first. The shows were an assault of noise in the best way, and the albums were always solid, but Exploding Head had a lightning in a bottle quality to the songs and sound and time I heard it that always pulled me back.

2022’s See Through You has brought that streak to an end. On their first full album with rhythm section John and Sandra Fedowitz (who first played on last year's Hologram EP) APTBS has managed to keep the intensity intact while crafting their catchiest and most diverse batch of songs yet. This one has gotten multiple plays a week from me since its streaming release in early February, and my LP copy hasn’t even arrived yet.

Opener “Nice of You to Be There For Me” introduces the new members with a bass and drum intro before the familiar wave of guitar noise shows up a minute in. Even so, the first block of the album actually feels laid back by APTBS standards, and it’s not until the fourth track “So Low” that they reach a more familiar level of intensity. This song also has one of my favorite hooks on the album, and illustrates the perfect balance they’ve struck with this collection well.

At the halfway point, “I Disappear (When You Are Near)” sounds like it crept right out of the Cure’s Pornography, and from there the album is nonstop “more” of everything you could reasonably want out of APTBS. “Anyone But You” feels like dark melodic punk if it was recorded inside a jet engine. “My Head Is Bleeding” is a tense, echoey nightmare that lives up to its title and begins and ends with synth parts that remind me of a John Carpenter soundtrack. “Broken” is the loudest rockabilly-influenced song the Smiths never got around to. Single “Hold On Tight” has lyrics that are perfect for your next crush mixtape, but rocks so hard that no one will notice you pining when you have it on repeat for days. This song feels like the climax of the album, and would have been a great closer, but it’s hard to fault the band for following it up with an encore of near-perfect MBV and New Order pastiches in “I Don’t Know How You Do It” and “Love Reaches Out” to close things out.

I didn’t want this review to fall into a rut of describing every song, but sitting here in the dark at 3am giving See Through You another listen through headphones, the second half of the album is just too good to skip anything. A band that can pull that almost 20 years into their existence deserves the hype.