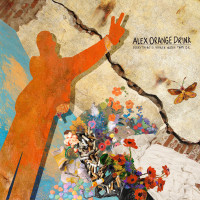 Everything is Broken, Maybe That’s O.K. is the sophomore solo record of Alexander Orange Drink–who is one of the most prominent voices coming out of Brooklyn today. Though Mr. Orange Drink may be more widely known fronting The So So Glos, the solo direction he has taken is proving to have a more experimental and autobiographical approach. His solo debut came in 2018 with Babel On, which was a darker take than what he seems to be following up with on this second record. Heck, even the artwork went from black and white to having a full colorful floral arrangement.

Alexander Orange Drink himself cites this record as “a series of antiquated political systems, a paper cut out heart, a long chain of amino acids. This is a personal story of embracing the broken pieces of our reality. The imperfect DNA that we inherit and pass along.” Needless to say, Everything is Broken has a real cynical but positive undertone to the nihilism that plagues us all. Thematically, this record to me is “the band playing on” as we ride the sinking ship and try to distract ourselves from the impending doom. We also get a deeper insight to that autobiographical element of Mr. Orange Drink with tracks that deal with his medical condition more specifically (and inspiring us to Google something that may be outside of our common knowledge).

The record opens with Brooklyn Central Booking, which to me is just absolutely brilliant. It paints the picture of Mr. Orange Drink sitting in a cell with a common hopelessness that we all (should) have in our American system while touching on his need for medication and fear of the future. What’s so perfect about this song is it so strongly introduces the memoiristic element naturally by taking us to the place where we all have time to sit and think about our life–a jail cell. The record then seamlessly takes us into the ultimate beginning of reflection with Homocystinuria Pt. 1 (1987-1994) and some memories of a young Orange Drinker.

The next few tracks showcase more musical artistry with catchy melodies, unconventional instrumentation, and a variety of lyrical content–Love Buzz to me being the one that floats in my head more than the others. Then we get into part 2 of HomocystinuriaI, which brings a different approach entirely to the first part by bringing an upbeat, slightly aggressive tone to the alienation felt by an older young Orange Drinker because of his condition. Part of me was really wishing there was a little more thrash to this section as opposed to the grooviness, but this was clearly an artistic decision to stick with mostly acoustic elements for these songs.

The conclusion to this record is the most meaningful to me because it feels like we start looking to the future. Teenage Angst Forever is the climax of this record and by far my favorite track. From the unresolved repressions that we were introduced to in the beginnings of the record, this track has an eerie acceptance of the past and starts to look ahead with an infectious hook. Sun is Only Shining piggybacks off of that idea as the record sends us off thinking that the only bright side of life is the one we make of it–and even if it all sucks, at least we’re still alive.

Holistically, this record is definitely not a mainstream or mediocre piece aimed at the masses. This record most likely will have a niche community that would totally connect with what’s going on, but that's the beauty of art. If you get it, you got it bad. Aside from the catchy elements and the overwhelming theme of alienation, it may be hard to fully relate to the uniqueness of Alexander Orange Drink’s background. It’s definitely worth listening, but it requires attention and even a lyrical read-along to fully get it.

A Place to Bury Strangers: See Through You