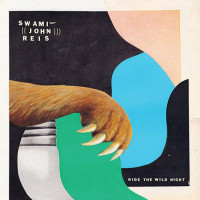 If you know of John Reis, then you can almost immediately picture his sound in your mind. A dissonant riff here, his distinctive smooth, yet somehow gravelly voice there, plenty of 60’s garage rock swagger throughout, all forming a pleasant miasma that is truly something of his own. Rocket From The Crypt are likely the most famous of all the groups he has been involved in, but the bands before (Pitchfork, Drive Like Jehu), after (Hot Snakes, The Night Marchers), and in between (The Sultans, Back Off Cupids) all show different aspects of his songwriting that are present with these batch of songs. If you are not familiar with him, then his first proper solo album is as good as any a place to join the cult.

Ride The Wild Night is not so much a cohesive and intimate look into the mind of the Swami, but more of a scattershot of ideas put down on tape. Not a bad thing at all, though, since each has a distinct theme lyrically, which you can get the gist of from the titles alone. The entire album is drenched in an old school pop/garage rock vibe, but contorted with Reis’s ability to add discordant melodies. Great touches of organ/piano, acoustic guitar, and harmonizing background vocals are throughout, with a solid backbeat provided by Hot Snakes/Night Marchers drummer J. Sinclair K, all adding to the mix of the lush, dark, and jangly sound.

Each song is a ripper, even when they are more subdued. The title track kicks everything off and provides an excuse to just drive to as dusk sets in. “I Ain’t Your Pawn”, “Rip From The Bone”, and “I Hate My Neighbors In The Yellow House” are more in your face, especially with the opening industrial adjacent synth on the latter, a track that is aimed at a nearby meth house, supposedly. Tracks “Do You Still Wanna Make Out?” and “Vape In The Dark Alone” are more tongue in cheek lyrically, with the former spouting the gross, yet hilarious line of “My dick smells like Cheetos, but my bed smells like Glade”...chef’s kiss, honestly. Reis knows how to spin a narrative for any mood. Closer “Keeper Of The Plains” ends the journey as the counterpart to the title track and is fitting to wrap things up, with the repeated line of “We’re gone” until the last minor chord.

Overall, this album will provide newcomers and fans alike a chance to digest fresh material from Reis and a reason to dig through his back catalogue. While not the most abrasive and urgent of his songs, the tracks flow well together and fly by. Give it a listen; if it is not to your liking, try revisiting it after taking in tracks by any of his other bands and hopefully it will click. For those who know of the Swami, then you are going to have fun. This man rarely, if ever, has disappointed.