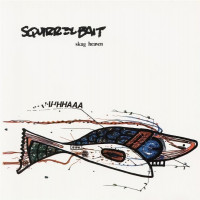 While the mid-west punk scene wasn't a dead zone in the mid-1980's; Louisville, Kentucky was far from its epicenter. In spite of this, Squirrel Bait was able to land a record deal with Homestead Records. Skag Heaven would prove to be the final album the band released in their abbreviated career. While not as widely known as many of their peers, who called places like Minneapolis, Chicago, and Cleveland home, their influence can be heard in many contemporary pop-punk and emo bands.

The opening track, "Kid Dynamite", features early Midwestern emotional hardcore and vocals that fall somewhere between Rites of Spring era Guy Piccioto, Jeff Pezzati, and Bob Mould. Lyrically, the band tends to deal in abstraction more than direct statements. But, there is still something distinctly working class about their approach. Their lives may not be going as planned, but it's not just due to a romantic situation. There are frustrations that are common to any young person in America, especially in Reagan's America of the 1980's.

Outside of the more traditional Midwestern hardcore sound, there is also a fair amount of experimentation going on. This experimentation would continue when Britt Walford and Brian McMahan would form the band Slint, whose debut Tweez would be released two year after this album. The success of the experimentation speaks volume to the skill this band had. Frequently, many hardcore bands would dive into experimentation so deeply they'd bury an otherwise great song beneath it. While there are some unique guitar experiments at the start and close of a few songs, they are never a disservice to the song itself. Instead, they are flourishes that accent already great songs. While the band does, on occasion, jump from one time signature to the next, they do so in a manner that doesn't betray their central hardcore sound. Their are certainly early elements of math rock here, though the roots are nowhere as deep as what Walford and McMahan would begin to put down in two years with the release of Slint's debut.

The most noticeable outlier on this album, is the closing track. While it wasn't unusual for hardcore bands to cover groups from the 1960's rock scene, "Tape From California" was the title track to Phil Ochs' fifth album. Ochs, despite not lacking in talent as a songwriter, would find his career languish in relative obscurity when compared to many of his peers such as Bob Dylan and Joan Baez. For the band to not only have heard Ochs' music but to also appreciate it enough to include a fairly standard punk cover of it, definitely speaks to their dedication to seeking out music from various styles and eras.

As previously mentioned, this was the final album of the band's career. Their influence, and that of their peers, can be heard to this day in bands like Hot Water Music, Lifetime, and hundreds of other bands who mixed hardcore punk, strong songwriting talents, and gruff vocals. If we take into account two members of this band would go on to form Slint, the importance of this band, and their demise, may well be one of the most overlooked in the history of the American underground music scene.