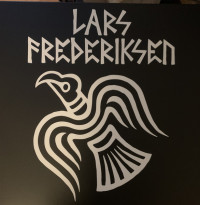 Stripped down, sincere, and anthemic are the three words I’d use to describe To Victory, the debut solo EP from Lars Fredricksen, the man behind the helm for Rancid, The Old Firm Casuals, and Lars Fredricksen and the Bastards among others acts – some eponymous, some not. Consisting of six tracks total, half of which are done completely acoustic, To Victory is a nice mix of originals and covers plus reworkings of songs from various chapters in his musical career.

I was curious when Mr. Fredricksen himself had posted about the idea of doing a solo album after a sold out solo show at Eli’s Mile High Club in Oakland just a week shy of lockdown back in March 2020. For many punk rock music fans in the Bay Area, that gig was the very last collective memory of anything normal before the world was turned upside down forever. Never one to sit around and do nothing, Lars polled his followers to see what songs they wanted to hear on a solo album, and thousands left comments with songs spanning his entire career from the assortment of bands he’s toured with over the years.

To Victory starts out strong with one of my favorite songs to see the ‘Casuals perform live, a reworking of God and Guns off of Butcher’s Banquet, which, despite being several years old is somehow suddenly completely relevant again lyrically. Symbolizing a sign of the current times, the folksy, Americana country tinged track does the original version much justice in its newer, refurbished and upcycled form. I cannot stress enough how this song progressively gets better as it creeps closer to the end with the addition of very Pogues-like aggressive piano chords layered over top the pure acoustic sound guitar juxtaposing Fredricksen’s raspy and at times, snarling voice.

Another Old Firm Casuals song represented is Motherland from their 2019 studio length album Holger Danske. Arguably the best reworking of one of Fredricksen’s existing pieces, the track starts out slow and evolves into a folksy sounding Norse tinged tune with the gradual addition of powerful organs, creating a sound that’s surprisingly epic for a solo venture which still pays homage to the original format.

Army of Zombies and Skunx are the two ‘Bastards songs on the EP which, staggered four tracks apart, are a keen representation of what are presumably some of Fredricksen’s all time favorite songs to play. With dozens of original tunes to pick from, a creative process with numerous options can sometimes be ultimately deductive to what you like doing most in a sort of natural selection process, and you can hear just how much he enjoys performing these songs in the music. Zombies and Skunx are two out of three tracks on the EP that are done completely electric acoustic, a nice twist on the solo vocalist trend that live streaming nearly wore out to death in 2020, but I digress because of the high production level of both tracks.

You know you’re in for something a little different when almost immediately a pair of maracas kick in during Army Of Zombies, then a boppy bovver style piano takes over at the halfway point, transforming the solo electric jam to a full on dance floor mover n’ clapper with a great 60’s overall feel. Skunx lyrically was the best choice of a song to end the album with, as hearing such a stripped down and raw version of Fredricksen sing: “Woah-oh-oh can’t you see//You’ll never take the gang out of me” - seems almost like witnessing him retake an oath to himself before us all, an oath he first took with The Bastards in the 00’s and now again in its most sincere form at the halfway point of his life. This is also the track that sounds most like Lars on early Rancid track “The Wars End”, and while I can’t speak for everyone, it's safe to say that when you think about Lars singing solo that’s the song that comes to mind first – Skunx is a nice revisit to that chapter in his career.

Fredricksen’s two cover songs both immediately sounded familiar to me despite not being able to initially place the tunes. Tomorrow’s Girls by the U.K. Subs is track number three and probably displays some of the most evolved vocals I’ve heard from this particular artist to date, showcasing just how far he’s come not only as a musician but also as a front man; I was quite impressed by the quality of his singing throughout the EP, but this is the track he really shines on. There’s an undeniably joyful feeling permeating this song, you get the sense that Fredricksen truly enjoyed covering this completely electric acoustic track, giving it a bovver twist by making it catchy and danceable, in the way that brought the Suede Razors to mind.

Comin’ Home by KISS is the other cover song on To Victory and I have to say it’s my favorite track on the entire project. With almost wholesome lyrics about missing your girl while you’re on tour, this is a song about the road, by and for true road dogs like Lars. With that cascading Pogues-like piano sound being reintroduced in this song again, there is almost a sort of campfire vibe to it where one could easily imagine “Uncle Lars” in the backyard or kitchen of a friend’s house while stopping though town after a show, having a little jam session featuring some of their favorite songs from back in the day.

Going back to March 2020, I actually had a ticket to attend that famed solo show at Eli’s but had to stay home after being injured while working a festival out of town the previous weekend. I was crushed that I couldn't make it, especially since the lockdown occurred immediately afterwards and that was the end of shows for almost the next calendar year afterwards. That being said, it’s a bit of a full circle moment for me to now be able to do an official review of To Victory for Uncle Lars, and anyone who knows me personally knows just how big a full circle moment it really is. But speaking of, full circle is exactly the overall term I’d use to describe this EP, as in six short songs he gives us a carefully curated glimpse into his world: from early musical influences to where he’s been, from what he holds dear to perhaps even where he’s heading. A highly requested and noticeably missing song on this EP is ‘Bastards tune “The Viking”, which leaves me in high hopes that there indeed possibly could be a studio length album in the works sometime in the future. In a perfect world, To Victory will be a precursor of what’s to come from Fredricksen musically, but even if he never explored solo work ever again, the 2021 EP has all the makings of a classic album which should be considered a both benchmark achievement and a hallmark of his overall career.