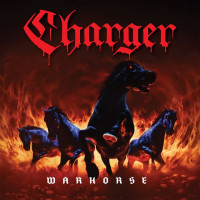 This is the ultimate in Punk Goes Metal I suppose. Matt Freeman from Rancid and Op Ivy and Jason Willer of UK Subs and Guantanamo School of Medicine and Andrew McGee have done this 70s-80s style heavy metal band Charger and its pretty goddamn awesome. Its reminiscent of Motorhead, Black Sabbath in their prime, Manowar, or Maiden with chugging guitars and throaty growls. So those expecting ska punk won't find what they seek, but they should still have the decency to be impressed.

The video for Rolling Through the Night you can see on Youtube is like the 80s horror cartoon movie Heavy Metal. A barbarian flies a pterodactyl over a lava pit chased by a B 52 with a zombie pilot. Its tied with the South Park episode Major Boobage for best shout out to that movie.

"Black Motor," "Running Out of Time" and "Forsaken Soul" were the standout tracks to me, but the whole album is spectacular. Its great driving music, or fixing your transmission to, or I guess if World War Three really does go down, marauding around to in the aftermath. Rolling Through the Night would be a good addition to the soundtrack of the Furiosa movie they're making.