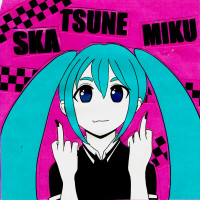 On first glance, you might be asking “What the hell is this?”. Absolutely... bright pink artwork with a blue haired anime girl (sans nose???) flipping you off, checkerboard patterns, the word “ska”... The trü punx may have already left the page, but for those who are more adventurous, a real diamond in the rough awaits. Skatsune Miku’s self-titled EP is for sure a strange listen at first, but nails exactly what they set forth to do. Vocaloid ska/punk/crust covers of songs featured in Japanese pop culture and anime? You are goddamned correct and they do it so well.

For a bit of background reference, vocaloid is a voice synthesizer program developed in the early 2000’s that emulates singing. Users are able to input lyrics and pitch shift them to form melodies. When it was ready to be commercially released, it was packaged as a replacement singer and each iteration featured its own “virtual idol”, with Hatsune Miku (which translates to “the first sound of the future”) being by far the most popular and recognizable to date.

Starting things off is “リンダリンダ (“Linda, Linda”) by The Blue Hearts, probably the most well-known song on the EP, due to so many other artists covering it, but most notably in this space by Me First And The Gimmie Gimmies, MxPx, and Andrew W.K. Whereas the original version has vocalist Hiroto Kōmoto delivering the opening lines over a few lone guitar chords to emphasize the lyrics,

Because you have a beauty that can't be reflected in pictures”

Skatsune Miku goes solo, giving a more hauntingly clean take due to the autotune, but kicks in with as much energy as the original, albeit with upstrokes and a bouncing bass line later on. The result is similar to Potshot or Hey-Smith, sans horns. Side note, if you have never heard of The Blue Hearts, go check out the original music video for this song. While not the first punk band in Japan, they are arguably the most popular.

The remaining tracks follow suit, trading the often overly produced original versions with buzzsaw guitars and d-beat drums, all breaking into a tight ska/punk rhythm at some point. If you are a fan of anime, some of these may ring a bell. Track two “ふわふわ時間” (“Fuwa Fuwa Time”) is from the K-On! franchise fictional band Haukago Tea Time, which throws a recognizable crack rocksteady rhythm in during a breakdown. Track three “Catch You Catch Me” by GUMI and from Cardcaptor Sakura starts off with a definite Choking Victim nod. Track four “遥か彼方” ("Haruka Kanata”) stays closest to the original performed by Asian Kung-Fu Generation and featured in Naruto. They could be described as a scrappier version of Jimmy Eat World and have a great back catalogue to discover. Track five “Butter-Fly” by Koji Wada and featured in Digimon Adventure Tri blazes by and the EP cools it down with a reggae/pub rock style for the final track “青春時代” (“Seishun Jidai”) by Going Steady. While the original version starts off with a guttural chorus of screams, Skatsune Miku is only capable of a pitch perfect descending simulation that sounds like an A.I. stubbing its toe. Points for trying, but it does show a flaw with the vocaloid software, as in it cannot inject emotion into the vocals.

Overall, Skatsune Miku’s self-titled EP is an interesting piece of work. The mystery group, Tokyo by way of Orange County, California, has definitely released a labor of love out into the world. Programming the vocals alone seems like a headache, but the end result sounds great, especially when paired with the crusty ska/punk instrumentation. With the lyrics not being in English, for the most part, the listener is able to appreciate the sense of melody that the original songwriters crafted; having a singing program emulate them in perfect pitch and harmony only highlights them that much more. At least give this release a chance; you might end up enjoying it, if only for sheer novelty, but the songs are fun and catchy enough for repeated listens. If a computer-generated vocalist unnerves you, maybe use this to ease you into our inevitable future where Skynet does indeed become real, but takes over by way of music idols instead of laser beams, bullets, and metal skeletons.