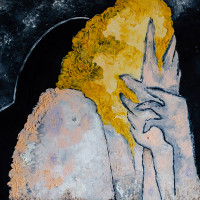 Sometimes I step outside of myself and consider the music I listen to and wonder what happened to me, at what point, that I find it comforting or cathartic to listen to such objectively horrible sounds. Helpless are a band who gave me reason to do this recently. Normally it will be one of two kinds of band that make me do this; either an absurd gore-focused death metal/slam band or a wild, chaotic hardcore band that play at a million miles an hour and with seemingly complete nihilism. Helpless are very much the latter.

When I have these moments of lucidity, I normally end up either chuckling to myself at the absurdity of what I’m listening to and go back to simply enjoying it, or I begin to take more surgical attention to the construction of the unholy racket and what artistic value it holds. Helpless make me do both things equally. On the face of it, this is a chaotic, 28-minute, technical, blackened hardcore/grindcore record. But even that doesn’t really feel like an accurate summation. There are definite grooves that anchor the chaos. The guitars are largely quite jangly in a post-hardcore way, as opposed to being anything more traditionally distorted, yet at times they feel heavy enough to have their own gravitational field. The vocals are the scream/roar hybrid that delivers a degree of blackened atmosphere, but they also suit the sludgier passages well. Along with the often-frenetic pace, you can probably now begin to see now why I’m often compelled to consider the constituent parts of the record & how it has been brought into existence.

My only reservation would be the occasions when the compositions stray away from being actual songs. It’s not as if Helpless aren’t capable of writing songs because there are examples of real craft and talent in this record, but it also seems that maybe a little too often the band slip into their wiry maelstrom of guitar stabs and squeals as opposed to truly furthering the song. But when they do focus on the songs themselves, then there are hooks aplenty and if anything, too many ideas. I’m not suggesting for a second that the Caged In Gold needs to be less challenging, because that’s very clearly a hallmark of Helpless’ sound. It’s just the periods that go full ADHD can detract from some incredibly beguiling songwriting. “The Empty Gesture” is magnificent, for example. But in the following song “Suppression”, then it’s over halfway through the song’s 2-minute runtime before much more than pure white-hot hardcore savagery appears. When it does, it sounds great, but as exciting as the ‘whirlwind of knives’ approach that the band have on lock is, its impact does wane when overused. And when you consider the creeping, psychological dread that “Single File” conjures up, then I’m all the more certain that this band have serious songwriting chops. They just need to back themselves a bit more in that area.

However, at 28 minutes long, there is never a point when I feel bored, that’s for damn sure. If you have a soft spot for gnarly hardcore that takes a pick ‘n’ mix approach to the extreme elements of other genres (death, grind, doom, math, etc) then you’ll want to check this out. I sure hope that Helpless don’t wait another 5 years to release the next record because this, their sophomore effort, shows growth, character, a sporadic but real gift for evoking moods; and hasn’t sacrificed a single iota in extremity. If they stay on this trajectory, the next trip around could genuinely be something special.

Home is Where: I Became Birds