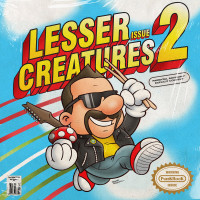 Lesser Creatures is the brainchild of Ramonescore Radio Records staffer Nick Spoon. I recall back in 2000 a slew of digital singles released by Outloud! Records showcasing his talents. Nick has collaborated with other current Ramonescore musicians such as Zac Buzzkill of the Radio Buzzkills and fellow legend of the one-man band, Grim Deeds. Issue 2 marks the second full length effort by Nick under his Lesser Creatures moniker. There is no denying Mr Spoon's influenced being deep rooted in all things 90's pop punk which is worn on his sleeve.

"Just A Vacation" opens up this short and fun set of pop punk anthems. In true Lookout Records fashion, the track starts with a loose but fun guitar lead in the intro. This all leads right into Nick's gritty and raw vocal delivery. Musically, this track is an outlier as the rhythm is more chaotic and not as "punk by the numbers" as the rest. Nick follows with "5:01" which may be my personal favorite on Issue 2. The tempo is slowed down enough to really showcase the vocals and lyrics. This is a song about going to work because you have to but longing to end your shift. The chorus of "Punching out for you" will stick in your head for days. The piss and vinegar comes back on "Bill Collectors" which follows. This fast and snotty number is reminiscent most of veterans the Vindictives or the Prozacs. "Stop calling me" is yelled out repeatedly in the catchy bridge. The aggression continues on "I Hope You Die" which is the next track. This number features a great buzzsaw guitar sound. "Leslie and Thomas" is the tale of two punks who fell in love online. I have witnessed their love for each other in various social media groups. This sugary sweet pop punk number showcases their affection for each other. There are some cool keys in the intro as well. Nick sings about living your life and doing your own thing on "Nobody's Keeping Score." This track will please fans of 90's era Screeching Weasel. The tempo continues to increase on "Getting Worse" which follows. Fans of Pink Lincolns will appreciate the speed and snottiness of this track. Pounding drum beats kick off "Pour Me Another" which is a track about drinking to deal with someone else's issues. This Ramonescore style track is complete with fast downstrokes. "Plan Ahead" is a chaotic track both musically and vocally. Elements of Dr Frank and the Mr T Experience come through on this number. "You Just Got Here" is a true working class punk rock song. On this track, Nick tells the story of working in a factory to support his family. This is a nice departure for this album which helps keep it from becoming too repetetitive or derivative. "Talk About It" structurally is a classic pop punk track in every sense of the word. The guitar lead in the intro feeds into the vocals over just the bass and drums. Nick Spoon sums up this autobiographical album properly and effectively with the band's namesake, "Lesser Creatures." This upbeat number clearly defines the following mission statement. First, you should have fun. Second, do not work too hard. These themes have been present throughout the album.

Pop Punk and Ramonescore fans should give this a listen. Per the influences mentioned throughout the review, Nick leans to the heavier side of the pop punk bubble. This is not a sugary bubble-gum pop punk album. These songs serve as a soundtrack to Nick's life to date. Musically, Lesser Creatures are not reinventing the wheel, but that is fine. This album is a true homage to both Nick himself and the music he truly loves. Time to clock out of work, pour a drink and get back to those who matter!

Home is Where: I Became Birds

The Rumjacks: Brass For Gold [EP]