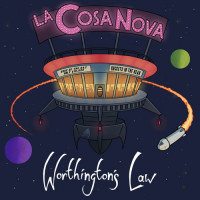 California has always lived in a unique mythology of it’s own. A mythology entrenched in the mid-century escapism of fast cars, beautiful women and fun in the sun. Perfectly manicured post-war suburbia. This mythology has found it’s way into the music there as well. Whether it is Jan & Dean in the 1960s, The Dickies in the 70s, The Vandals or Blink-182 in the 90s. You can find this escapist through-line that links it all. Despite Worthington’s Law hailing from North Carolina, their latest EP, La Cosa Nova is steeped in the lighthearted mindset of California. But - it is a big but, and I cannot lie - there is a certain world weary maturity that grounds La Cosa Nova unlike most other California pop-punk/skate rock of it’s ilk.

”Son Of A Teacher” immerses the listener in the world of a kid growing up under the rule of an oppressive religious household. References in the lyrics to mainstream institutions like SNL and the Catholic Church as a recipe for damnation really highlights the suffocating nature of religious fundamentalism. There is this fantastic little descending three note guitar hook played in the lead throughout the verses that adds a layer of melancholy to the otherwise bright slice of pop-punk. It grounds the serious subject matter with the sarcastic wit of the lyrics. It is the kind of song that is written by people that were the kid in the lyrics or knew the kid in the lyrics but are no longer kids themselves. Partway through the song there is this plinking toy keyboard sound that comes in, that is just silly enough. Further illustrating that that Worthington’s Law understand the potency of contrast within the context of a good punk rock song. Elsehwere on the album religious hypocrisy finds itself as the target of frontman Nick Faber’s lyrics with “Religious Exemption”. As Faber croons “Nowehere in the Lord’s Prayer/ does it say anything about me, myself and I/”, you get the feeling while the subjects in “Son Of A Teacher” could have existed in Reagan’s America and the subject of “Religious Exemption” is the product of Trump’s America it isn’t actually decades of space that separates the two.

It isn’t all doom and fire and brimstone on La Cosa Nova though. Songs like “No One Wants To Come (With Me)” and “In Love With A Nun” are purely humorous numbers about not having anyone to go see the Circle Jerks show with and having an inappropriate fixation on a member of a holy order. Although the later does once again touch on Christianity I suppose. And as you get older in the punk scene you may find that there are less people your own age that are ready, willing and able to saddle up for a hot and sweaty night at the local club for your old favorites.

“Everybody’s Gonna Croak” opens up with some slightly off-key piano balladeering on the speaker’s own mortality that is vaguely reminiscent of Fat Mike’s Cokey The Clown persona. This isn’t a bad thing as I think the Cokie the Clown material/character produced some of NOFX’s most worthy contributions to the genre. After half a minute of piano tinkering, the song rips into a Ramones-esque pogo romp. Towards the end of the song things break into a fitting ska punk rhythm with requisite bouncy bass line. Again, things are kept light and breezy but we’re all gonna die, okay?

Any fan of 90s California pop-punk should really be able to sink into La Cosa Nova but I’d imagine that if you were actually there in the 90s you’d get vibe with it just that extra bit more.