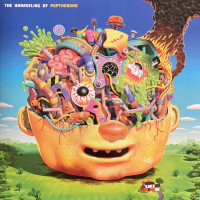 PUP have been one of the success stories of recent years when it comes to punk music in the wider alternative context. Having only come into being (in their current name, at least) in 2013, they are yet to have anything approaching a blemish on their record in the opinion of most people familiar with their work. So with their 4th record in 8 years looming, is that flawless record under threat? The band have managed to avoid the common pitfalls of complacency, losing their signature sound, setting sights on the mainstream or anything more insular, thus far. But all good things come to an end, right?

Right. But not here and not now. When I received this, I was intrigued by the meta album title, the structure of the record, the song titles and the relatively apparent (albeit loose) concept approach that PUP have opted for this time around. That just becomes more apparent with “Four Chords” which for half its runtime is a piano lament based around the business side of making a new record and how pointless it can feel, which seemingly breeds self-hatred. The “Four Chords” interludes carry through the record with Pt.II coming at track 6 and Pt.III immediately before the album closer. Given the routine nature of their appearance across the record, they do a good job of keeping the motif of the record at the front of your mind, which is an area where a lot of concept albums struggle, of course.

But I’m glad to say that the record doesn’t rely on its concept entirely. There are 9 songs beyond the increasingly brief “Four Chords” trilogy and there’s not a duff track amongst them. First proper song “Totally Fine” will surely be on the set list henceforth. The bittersweet lyrical content, anthemic chorus and the ‘Na na na…’ passage towards the end that is dying to be sung out by a sweating, heaving throng in the upcoming shows supporting this record’s release. It’s a fucking great track and one that encapsulates what PUP are and do, magnificently. There is also a decent degree of tonal dynamics in the record. “Waiting” is an acerbic, bile-filled, gritty punk banger also including female vocals, solos and more besides, but still gets all this done in just over 3 minutes. There’s incredible efficiency of songwriting, which is again, maybe not something that concept albums are synonymous with.

Also worth investigating are the album’s longer songs. Certainly “Cutting Off The Corners” has a kind of retirement home Modern Baseball lachrymosity to it. But it swerves being trite, or twee, by a very long way somehow. There’s even a searing electric guitar line that cuts through at one point. It’s not flamboyant songwriting by any measure, but it is songwriting that tackles various styles, shies away from unnecessary digressions but also has a feeling of grandeur to it. It does feel genuinely like a landmark record in many ways. The songs flow perfectly together and get so much done in such an enjoyable and digestible way that the replay factor is off the charts. I’ve been listening to it a LOT and I don’t see that stopping any time soon.

It’s well worth pointing out the circumstances under which this recorded were recorded, I think. The recording was done over a 5-week period in a sprawling old mansion in Connecticut with Producer Peter Katis. The same residence-cum-studio and producer that have been behind records by The National, Interpol and Kurt Vile amongst others. The roof leaks when it rains and the attic is inhabited by no small number of bats. The band barely left the house for the period they spent there, and this had an interesting effect on the process. Babcock said of the band’s time there; “As the weeks passed, we seemed less and less rational, objective and sane. You can hear the band start to fall off the cliff, and because of that, I think this record is our truest and most genuine to date.” It’s also their most ambitious. And I would say, their best.